Why do people of different parties seem to have such a hard time understanding each other and reaching agreements? It may be, in part, because they belong to completely different organizations. This is one suggestion of a new article, “The Organizational Affiliations of National Party Convention Delegates,” written by Michael Heaney, Dara Strolovitch, Joanne Miller, and me.

We surveyed hundreds of convention delegates at the 2008 national party conventions, asking them, among other things, what organizations they were members of. The response patterns differed significantly across party lines; Democrats belong to a wide range of groups, with no one organization proving dominant, while Republicans tend to belong to just a few key organizations. The network diagram below demonstrates this, with each point indicating a named group and the ties between them indicating that they share a common delegate. Larger groups are those named by more delegates. As can be seen below, the National Federation of Republican Women dominates among Republican delegates, while Democratic delegates are split between a number of different liberal organizations. 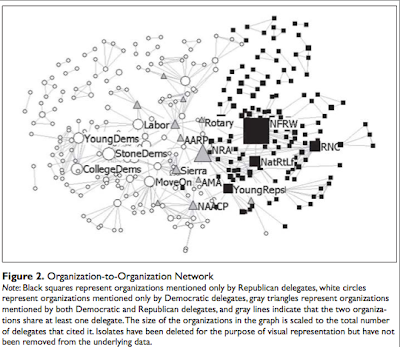 What the data also suggest is a real lack of common ground. Less than two percent of all co-memberships crossed party lines. There are a handful of groups that boast delegate members of both parties (notably, the NRA, the Sierra Club, and the NAACP), but those groups could hardly be labeled bipartisan, and typically they were named by a very lopsided party contingent.

The paper was recently published by American Behavioral Scientist. An ungated PDF version is available here.