Mitt Romney joined Barack Obama for an undoubtedly awkward lunch last week. According to a White House statement, “They pledged to stay in touch, particularly if opportunities to work together on shared interests arise in the future.” Will they work together on such future opportunities? Not very likely. But has little to do with their personalities and much to do with the way parties function. 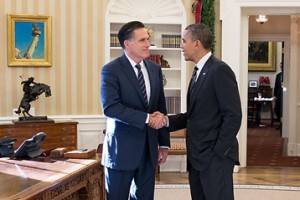 For an interesting counter-example, check out Susan Dunn’s account of Wendell Wilkie’s transformation from Franklin Roosevelt’s electoral opponent in 1940 to his advocate a few months later. As Dunn notes, Wilkie ran a spirited campaign against President Roosevelt, accusing him of nothing less than collaboration with Hitler. After losing, however, Wilkie pledged his support, and FDR in turn made Wilkie a personal representative to Britain during the early days of World War II and often showered him with praise for his bipartisan spirit. So why don’t more defeated candidates do this sort of thing? Well here’s what happened to Wilkie shortly thereafter:

Newspaper columnists and editorial boards showered Willkie with praise, but the Republican “old guard” did not. Instead, it set out to destroy his influence. At the party’s 1944 convention, Willkie was not permitted to address the delegates. He died that October, a lone wolf who had paid a steep price for cooperating with F.D.R.

Parties are highly resistant to their members — even presidential nominees — helping people out across party lines, and they can limit the careers and legacies of those who try.