Charlie Cook expects that 2014 will be a tough election for Democrats due to the “six-year itch.”

The 2014 vote is what’s known as a “six-year itch” election, with the party holding the White House usually losing a substantial number of House and Senate seats in the sixth year of its tenure. There are a variety of reasons, but at that midway point in a party’s second four years in the White House, the “in” party tends to lose energy and focus. Party leaders run out of ideas, and the “first team” in terms of personnel—the people who were there when the president took office—have often bailed out, and the second or third team is sometimes not as good. Voters tend to grow weary and to look for something different.

I find this causal story very unconvincing. I mean, I suppose you could make the case that the Reagan and Clinton administrations had stopped making aggressive policy moves by their sixth year in office, and maybe that could be classified as a lack of “energy and focus,” but the president’s party did relatively well in those midterm elections. And the Democrats got mauled in 2010, but it could hardly be said that that was due the Obama administration’s lack of energy. (If anything, they were punished for being too energetic and focused.) Perhaps I’m a bit biased in favor of explanations that can actually be measured, but the idea that voters are turning against the president’s party due to insufficient energy and focus strikes me as a real stretch.

That said, is the six-year itch a real thing? Cook notes that in the sixth year of a presidential administration, the president’s party loses, on average, 29 House seats. That sounds serious, although it should be noted that the president’s party loses an average of 22 seats in other midterm elections. So a seven-seat difference isn’t nothing, but given only 16 midterm elections since World War II ended, that difference doesn’t offer a lot of explanatory power.

Here’s a scatterplot showing the relationship between economic growth (measured as the growth in per capita real disposable income from the third quarter in the year prior to the election to the second quarter in the election year) and the seat gains for the president’s party. The six-year itch elections are labeled in red: 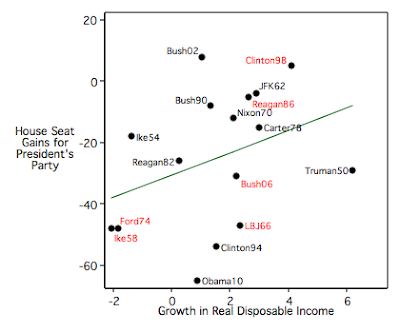 Four of the six six-year itch elections appear below the trend line, suggesting a modestly negative impact on the vote. Still, it should be noted that the six-year itch elections include 1974 (occurring immediately after Ford’s deeply unpopular pardon of Nixon) and 1966 (when the Vietnam War was starting to take its toll on Johnson). These might be considered unusual elections. The six-year itches also include 1998, one of only two postwar midterms in which the president’s party gained seats.