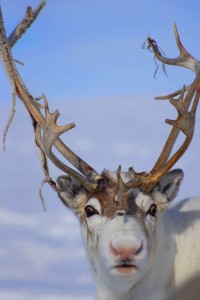 The reindeer’s nasal mucosa was richly vascularised with an abundant microcirculation ferrying a rich concentration of red blood cells; the mean perfused vessel density was 20 (0.7 mm/mm2) with a microvascular flow index of 3.0 arbitrary units (fig 3). An infrared thermographic image of the reindeer obtained with an AGA Thermovision IR camera (Model 750 (spectral range 2-5 Âµm)) connected to an AGA Thermovision Colour Slave Monitor (Model OM 701; AGA, Stockholm, Sweden) after a treadmill test showed that they do indeed have red noses.23 In addition to the nose having a high microvascular density (fig 3), the nasal mucosa also revealed an abundance of ring-like vascular arrangements, similar to those in humans (fig 3).

The microvascular networks and hairpin-like vessels of the nasal microcirculation in reindeer were similar to those observed in humans. The functional vascular density of the reindeers’ nasal mucosa was 25% higher than that in humans (fig 3). Interestingly, the reindeers’ microcirculation was pumped in pulsatile intervals with a complete lack of red blood cells in the lumen of the microvasculature during diastole followed by forceful flow hyperaemia during systole. As this effect cannot be properly justified in a static image, we produced a video recording (see supplementary material).

The paper is ungated, but I cannot find the video.