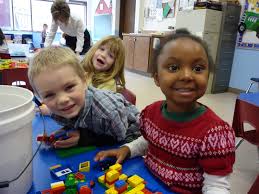 Last night in Present Barack Obama’s State of the Union address he proposed something interesting: preschool for all. As he explained:

Study after study shows that the sooner a child begins learning, the better he or she does down the road.

But today, fewer than three in ten 4-year-olds are enrolled in a high-quality preschool program. Most middle-class parents can’t afford a few hundred bucks a week for private preschool. And for poor kids who need help the most, this lack of access to preschool education can shadow them for the rest of their lives. So, tonight, I propose working with states to make high-quality preschool available to every single child in America.

The reason for this is, as he put it, because,

Every dollar we invest in high-quality early childhood education can save more than seven dollars later on, by boosting graduation rates, reducing teen pregnancy, even reducing violent crime. In states that make it a priority to educate our youngest children — like Georgia or Oklahoma — studies show students grow up more likely to read and do math at grade level, graduate high school, hold a job, form more stable families of their own.

Will this work? Well, it certainly has potential to work. He’s right that “study after study” demonstrates that preschool greatly benefits low-income children.

In part this is because poor children in general receive less intellectual stimulation from parents (children in middle-class, professional families hear about 30 million words by the time they turn 3; children from families on welfare hear about 10 million words by age 3). Preschool can help improve intellectual stimulation and level the playing field so that all children start school in similar places intellectually. Preschool, incidentally, appears to provide few academic benefits to middle or high-income children, who mostly receive extensive academic preparation from parents whether or not they’re in preschool programs.

That “every dollar we invest in high-quality early childhood education can save more than seven dollars” figure apparently comes from an analysis of the High/Scope Perry Preschool Project in Ypsilanti, Michigan, which boasted a $7.16 return on investment. That’s because the low-income students who participated in the program were more likely to graduate for high school and earn more money as adults than those who didn’t have the preschool program. As a Heritage Foundation analysis found, however, the Perry project used an incredibly small sample size (123 students; 58 of them received preschool) and no other program in the country has so far been shown to demonstrate a similar return on investment.

This doesn’t mean preschool isn’t a good idea, but we’re likely to see policymakers debate these numbers extensively if the Obama administration makes the preschool program a priority.

Causing the program to actually happen (“working with states” means 50 different hurdles to address) could be something of a problem. At this point only 10 states even require school districts to provide free, full- day kindergarten. We’re a long way from universal preschool.

Aliyah Frumin over at MSNBC estimates that a national preschool initiative could end up costing tens of billions a year though, as she puts it, proponents “argue much of the cost would be offset by having more parents in the workforce.”