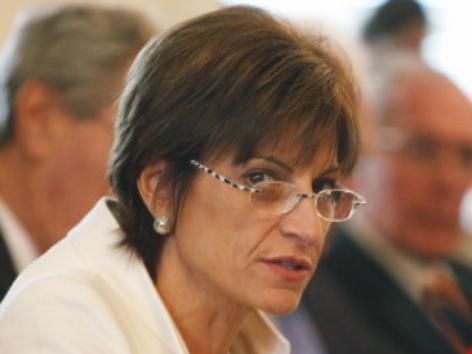 Back in June the University of Virginia’s board of visitors tried fire president Teresa Sullivan due to her lack of enthusiasm for a vague plan to institute more online classes. The president was reinstated after backlash from students and alumni but problems remain at the school.

At least in part this has to do with the fact that the school not only kept Sullivan on board, the state also retained Helen Dragas (above), the real estate tycoon who tried to fire Sullivan last year, as a board member. According to an article in the Washington Post:

Days after Virginia lawmakers confirmed Dragas’s reappointment to the board in January, the rector sent the president a lengthy and detailed list of goals to meet this school year. Sullivan, apparently incensed, responded by sending the entire board an e-mail arguing that the 65 goals constitute, among other things, “micromanagement.”

“The sheer number of goals is close to impossible to achieve, especially with only five months left in the academic year,” Sullivan wrote in a Feb. 6 e-mail obtained by The Washington Post. “I am not averse to stretch goals, but I also do not care to be set up to fail.”

Sullivan points out that in general university presidents take broad goals from their boards, not detailed lists.

According to the article, Dragas did not dispute that tension existed between the board and Sullivan but believed a healthy discussion to be productive. As she put it: “U-Va. is a public institution. It’s not an academic playground, and we have to make some difficult decisions.”

What exactly is an academic playground, anyway?

Sullivan said that 22 of the Dragas goals “had not previously been discussed.” Several other items required action from the board itself. Sullivan also said that one of the goals “requires me to do something that the General Counsel tells me I am not legally authorized to do.” [Image via]