I saw this over the weekend. The Relationship of Sugar to Population-Level Diabetes Prevalence: An Econometric Analysis of Repeated Cross-Sectional Data:

While experimental and observational studies suggest that sugar intake is associated with the development of type 2 diabetes, independent of its role in obesity, it is unclear whether alterations in sugar intake can account for differences in diabetes prevalence among overall populations. Using econometric models of repeated cross-sectional data on diabetes and nutritional components of food from 175 countries, we found that every 150 kcal/person/day increase in sugar availability (about one can of soda/day) was associated with increased diabetes prevalence by 1.1% (p <0.001) after testing for potential selection biases and controlling for other food types (including fibers, meats, fruits, oils, cereals), total calories, overweight and obesity, period-effects, and several socioeconomic variables such as aging, urbanization and income. No other food types yielded significant individual associations with diabetes prevalence after controlling for obesity and other confounders. The impact of sugar on diabetes was independent of sedentary behavior and alcohol use, and the effect was modified but not confounded by obesity or overweight. Duration and degree of sugar exposure correlated significantly with diabetes prevalence in a dose-dependent manner, while declines in sugar exposure correlated with significant subsequent declines in diabetes rates independently of other socioeconomic, dietary and obesity prevalence changes. Differences in sugar availability statistically explain variations in diabetes prevalence rates at a population level that are not explained by physical activity, overweight or obesity.

It should come as no surprise that calories are related to obesity, which is related to type 2 diabetes. But this study looked at whether the source of the calories mattered. It turned out that it did. The study showed that for every 150 kcal/day that a person ingested, the prevalence of type 2 diabetes in the country increased by a non-significant 0.1%. But a 150 kcalday increase in sugar intake was associated with a (significant) 1.1% increase in diabetes prevalence. That effect was cumulative. This was after controlling for other factors, including alcohol and not exercising. The effect as also not confounded by obesity. Money shot: 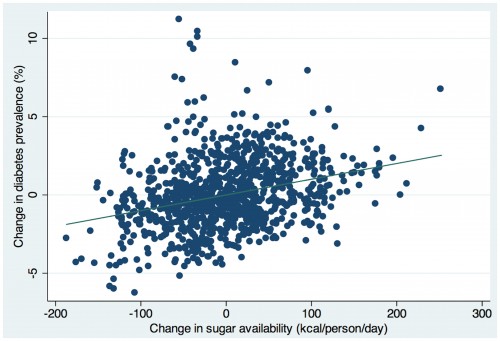 I’ve been down on soda bans as a means to get people to eat more healthily. But that doesn’t mean sugared beverages aren’t bad for you. Each 12oz can contains about 150kcal of sugar. If we coud all agree to take in less sugar, we might see some significant changes in the rates of type 2 diabetes.