I was poking around this Brookings report mentioned by Brad Plumer the other day and was fairly impressed at the growth numbers on even the longer routes. The Texas Eagle route, for example, saw 256% growth in ridership from 1997-2012: 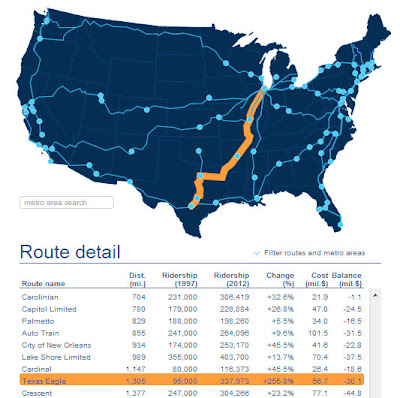 It is from a very low initial number, but still pretty impressive.

Offhand, I’d guess this is the result of rising airfares, squeezed incomes, and the deeply irritating, mostly pointless security procedures at the airport. (I myself bought my first long-haul Amtrak ticket for a wedding in Georgia just the other day.) Trains are far more fuel-efficient than planes, and it seems reasonable to project that fuel prices are only going to go up from here.

So cost issues aside, I would hesitate at shuttering all these long routes in favor of plowing the money into infrastructure maintenance for the Northeast Corridor routes (which is indeed badly needed), as Matt Yglesias suggests. Perhaps some routes could be consolidated or eliminated, but trains are only going to make more sense going forward, and it seems sensible to keep at least a skeletal national rail network in place. I would bet inside of a decade half these routes will be near the breakeven point.