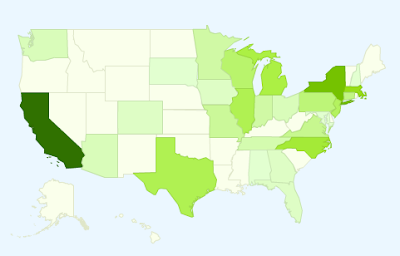 The awards are, unsurprisingly, going to states with lots of large research universities. Notice another pattern? With the notable exception of Texas (and maybe North Carolina), the states getting the most grants are pretty blue ones. Notably, there are no current grants going to Oklahoma (home of amendment author Sen. Tom Coburn), and only one going to Maryland (home of Sen. Barbara Mikulski, who brokered the deal with Coburn). That is to say, the two senators most directly responsible for this change in funding rules have all of one constituent between them who is currently receiving NSF support for her political science research. (That would be the excellent Karen Kaufmann — a fellow UCLA grad — who’s studying group relations and voting behavior in urban elections.)

Now, of course, those states have plenty of political scientists in them, some of whom were probably considering applying for NSF grants or even have grant applications under review right now. And NSF grant funding doesn’t just benefit the principal investigator — it goes to hire student researchers, data analysts, interview transcriptionists, and others, and the host universities get a pretty nice cut.

But if you want to consider why the vote went the way it did, take a look at the map. [Cross-posted at Mischiefs of Faction]