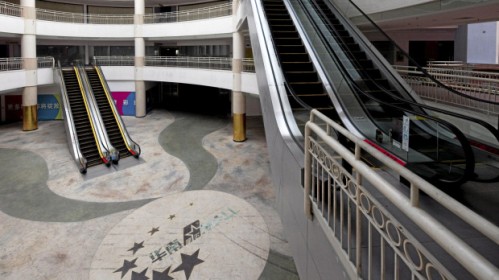 Images of empty houses built and then never lived in or lived in and then lost are synonymous with bad policy-making and the consequences of the Great Recession. In Ireland they represent a country gone from Celtic Tiger to nightmare, leaving ghost estates standing as a reminder of the dreams of a far better time. In the U.S., foreclosed and boarded up houses are a reminder of the price of an overheated housing market and lax lending practices. Thus it’s perhaps understandable that people have drawn similar conclusions to China’s current housing market, awash with staggering numbers of empty homes. 60 minutes did some reporting on the phenomenon and Time has as well. (The topic got big enough to get its own Wikipedia page.)

Despite these reports and (largely visual) supposed similarities, there are differences between China’s housing market and the Western crises that came before it. There is a lack of agreement on whether China’s property market is a bubble at all or is just rising with the rest of China’s economy—Quartz argues that that the “ghost cities” will soon be occupied. Here are a few reasons why this is happening, and how it might be different from other housing bubbles in the past.

There are two main theories about what is going to happen: the first argues that the “bubble” is about to burst and bad things will follow. The other argues that housing prices will probably cool down at some point in time but that China’s rapidly growing economy can keep up with the supply of new housing, especially given rapid urbanization currently underway. This could hold even if that demand is tied to housing that is built but not occupied. Before litigating these hypotheses, it is helpful to look at how this is different from other housing bubbles in the past.

Before rapid urbanization, which took off during the ’80s, most married couples lived with their parents, with three generations often living in one home. Outside of this arrangement housing was provided by state-owned employers and renting was nearly unheard of. With China’s transition to a market economy, most employers stopped providing free housing, but many were given the option of buying their previous free housing at low prices. Others purchased properties after receiving money from developers buying up land. But now, China is in the midst of what is arguably the largest urbanization in history, with about 230 million people moving to cities from 2000 to 2011. This urbanization further complicates the situation by creating disparities between big cities and smaller urban areas. While prices heat up in some places swaths of vacant houses build up elsewhere. This is a key distinction: unlike Ireland, for example, China’s empty houses are empty to begin with rather than because a bubble has burst. The Financial Times wrote in February:

Not only are housing prices in the biggest cities moving in a different direction to those in smaller centres, there is also a glaring discrepancy in the amount of development being undertaken.

The country’s main metropolises – Beijing, Shanghai and Shenzhen, which each have populations of more than 10m – suffer from chronic shortages of housing for low to middle- income residents. By contrast, scores of smaller cities with populations of up to 3m face an increasingly severe oversupply.

This is why a simple description of China’s housing market as a “bubble” misses the point. Does “bubble” refer to the soaring prices in the biggest cities, where only the wealthy can afford homes? Or does it refer to the row upon row of empty apartment blocks in the smaller cities?

One of the other significant differences is that these homes are being bought as savings vehicles, instead of being empty because they were not bought. There are two main reasons for this. The first is that opportunities for investment are extremely limited in China. The banking system is highly controlled the monetary authorities who set interest rates and socialize the risks of lending. As a middle-class or higher individual with savings you don’t have a lot of options as to what you can do with your money. The stock market is volatile, it is difficult to invest abroad, and interest rates on personal savings accounts are usually below the rate of inflation. These lower borrowing costs primarily promote investment in real estate, manufacturing, and infrastructure.

Housing is viewed by many as being the safest bet, because there is a perceived value in owning something tangible, which is why many people are buying residential properties (in many cases more than one) and leaving them vacant. In other words they are simply accumulating property for retirement savings. As the Washington Post writes:

Urban housing stock made up 41 percent of Chinese household wealth in 2011, compared with 26 percent in the United States, according to Nicholas Lardy, a senior fellow at the Peterson Institute for International Economics.

This is one significant way in which China’s housing bubble differs from the one seen in the United States. People are not buying and flipping properties, instead they are holding them vacant off-market.

The second reason that these houses are vacant is that renting is unpopular in China, and the rental market is badly underdeveloped. Many couples feel as though they have to buy a home before they can get married and men often find it difficult to get married if they don’t own property. The rights of renters are also poorly protected. Slumlord behavior, with evictions and large increases in rent are not uncommon.

Even with that predatory landlording, the real estate developers say that property prices are too high and rents are too low to make leasing profitable. So without a good return on investment, there are few incentives to lease residential and commercial space instead of building and selling it.

The current housing situation also reflects the broader inequalities of China’s rapid urbanization. While some own more homes than they need, others simply can’t afford anything or aren’t allowed to buy. Migrants without residence permits are barred from purchasing a house for five years. This puts migrants in the unfortunate position of having to rent in an increasingly expensive market. Average rents increasing 23 percent since 2010, while demand for rentals went up by 82 percent. (Government efforts to build social housing include 36 million units that were planned in 2011.)

Then there are broader structural issues that might be spurring Chinese housing overcapacity. The Chinese government pegs the renminbi at a low rate to the dollar (though it has eased somewhat) favoring manufacturing and exports, which, while enabling astonishingly rapid growth, has led to some problems for the overall economy. As Tyler Cowen wrote for the New York Times:

Those same subsidies, however, have spurred excess capacity and created a dangerous political dynamic in which these investments have to be propped up at all cost.

China has been building factories and production capacity in virtually every sector of its economy, but it’s not clear that the latest round of investments will be profitable anytime soon. Automobiles, steel, semiconductors, cement, aluminum and real estate all show signs of too much capacity. In Shanghai, the central business district appears to have high vacancy rates, yet building continues.

There are costs that come from China’s development model, which provides subsidies which make it cheap to invest in manufacturing and real estate development. It has a very high reliance on net exports, while relying little on domestic household consumption—with a high savings rate resulting from their trade imbalance with the United States, a nation with the opposite and complimentary problem .

Despite the predictions of many Westerners, it is not clear that China’s real estate market is destined for catastrophe. Development in China has progressed on a massive scale;in the midst of the largest urbanization in history one might expect a mighty real estate boom. China’s housing market, however, is tied in with lots of other unhealthy influences, and on a basic level, high vacancy rates accompanied by lots of new developments are troubling. Hopefully in the future a proper rental market can be developed.

It would go a long way for the Chinese government to make basic changes in the way that Chinese can invest and to the way that interest rates are determined. Another policy to consider would be a Social Security-style income support for the elderly, since much of the housing accumulation is driven by fear of poverty in old age.

But fundamentally, it is bizarre to have of hundreds of millions of peasants wanting to move to the city while millions of apartments simultaneously sit empty. This ought to be a solvable problem.

Rhiannon M. Kirkland is an intern at the Washington Monthly.