There’s been a lot of discussion recently both at the Monkey Cage and elsewhere both about the value of political science research for informing the decisions made by policy makers and about our continuing need to do a better job highlighting that value.  With that in mind, I want to highlight the following new paper by my NYU colleague Cyrus Samii and his co-author Eric Mvukiyehe, a PhD candidate at Columbia University. 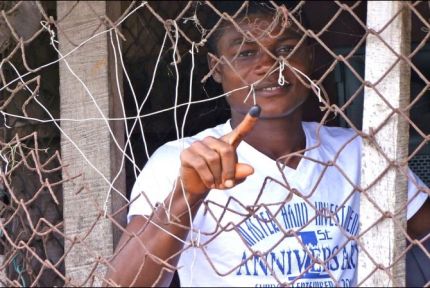 Samii and Myukiyehe used a field experiment in Liberia to compare the relative effectiveness of two different democracy promotion strategies in a fragile, post-conflict state, in this case the West African nation of Liberia. Working with a coalition of NGOs, they administered a treatment of monthly meetings in the community over a nine month period leading up to an election. In some regions, these meetings focused in security conditions during the election, whereas in others they focused on civic education.  Some village had both the security and civic education meetings.  Using an experimental framework, 142 villages were randomly assigned to either receive the security treatment, the civic education treatment, both, or neither.  The results are striking.  From the paper’s abstract:

Based on official polling-place level vote returns, survey data, and structured behavioral measures, we found that the civic education program had a profound impact in increasing enthusiasm for participation, reducing the parochialism in voter expression, and increasing voter vigilance and effectiveness, while, in an unexpected manner, also increasing people’s perceptions of the degree of violence and intimidation involved in the electoral process. The security committee intervention had no substantial impact, and there were no apparent benefits arising from the interaction of the two programs.

This is practical advise that any policy maker – whether in the government or outside of it – interested in democracy promotion and efficiently allocating resources can use. It is worth noting, though, that this type of research is not cheap – and indeed, replicating the study in other contexts would of course improve the confidence we can have in its findings – and is probably unlikely to be carried out by the private sector.

The full paper is available here.