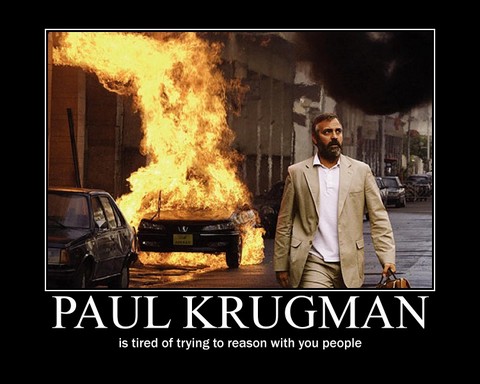 There has been something of a flame war going between Clive Crook and Paul Krugman of late over fiscal stimulus, economics, and the tone of Krugman’s writing. It’s a bit silly, but it raises some interesting points I’d like to extract. Let me replay some of the history, for reasons that will become clear.

After the first round, Crook took exception to Krugman’s intemperate tone, and made the quite specific claim that Krugman was using the 2009 stimulus for partisan ends:

Along with small-government extremists on the Republican side, Krugman and his admirers were at the forefront in casting discussion of the stimulus in left vs. right terms. For many Democrats, the top priority in the fiscal-policy discussion was not, in fact, to make the stimulus bigger but to reverse the Bush high-income tax cuts and to make sure that the composition of the stimulus, whatever its size, as far as possible favored higher spending over lower taxes.

Brad DeLong pointed out that this is, in fact, not the case, citing chapter and verse. He finds no Krugman posts in 2009 arguing that the high-income Bush tax cuts should be reversed. Where is your evidence? asks DeLong.

Today, Crook is back, and his response is a textbook example of moving the goalposts. He conveniently forgets the stimulus debate, around which all his previous claims were centered, and digs up a Krugman column from December 2010, almost two years later. It’s about the budget debate at the time, and Krugman argues that since Republicans were holding the Bush tax cuts for the middle class hostage for the ones for the rich, Democrats should refuse to negotiate. Indeed, this is a pretty partisan column which downplays the effect of tax-side austerity. But it is essentially a point about negotiation strategy—faced with an extremist and absolutist Republican party, Krugman argues, the Democrats would do well to demonstrate their willingness to play hardball.

In any case, this is small bore stuff. What is unquestionably clear is that Crook’s earlier claim that “Krugman and his admirers were at the forefront in casting discussion of the stimulus in left vs. right terms” is completely bogus, and he clearly knows it.

But more fundamentally, Crook’s entire framework of how partisan liberals viewed the stimulus debate—and politics generally—is wrongheaded. Back in January 2009, there were a Democratic president and huge Democratic majorities in the House and Senate. Liberals didn’t give a crap about “left vs. right,” they wanted to use those victories to consolidate some big policy wins. And as lefty economists realized, by far the most important thing to do from the perspective of Democratic self-interest (not to mention the American people) was to fix the freaking economy. Mass unemployment is absolute poison for elected officials (just ask Herbert Hoover), which is why Krugman was howling himself hoarse trying to get a bigger stimulus. He worried, correctly, that a Clive Crookish effort to get bipartisan support wouldn’t work, and you’d only get one bite at the apple:

This really does look like a plan that falls well short of what advocates of strong stimulus were hoping for — and it seems as if that was done in order to win Republican votes. Yet even if the plan gets the hoped-for 80 votes in the Senate, which seems doubtful, responsibility for the plan’s perceived failure, if it’s spun that way, will be placed on Democrats.

Is Krugman a outspoken advocate who lays on the snark a bit thick sometimes? Sure. But unlike centrists, he doesn’t regard politics like a game of shuffleboard. He takes his convictions seriously, and would never consider something so boneheaded as holding up economic recovery to stick things to the rich.

UPDATE: I originally used the word “ideologue” instead of “advocate” in the final graf. I changed it because it has negative connotations that I didn’t mean to imply. Krugman has strong beliefs, but he’s not the Spanish Inquisition.