Pew has a very interesting new survey out on attitudes towards the European Union among citizens of eight EU countries. Here are a just a few of the more interesting results.

First, attitudes towards the EU are getting worse. While there is always going to be some noise in these kind of data, the consistency of the negative changes is noticeable. What I think is potentially most important are the two countries (France and Spain) where we’ve gone from significant majorities with a favorable view of the EU to majorities without a favorable view. The stunningly low numbers of Czechs who now see EU membership as having harmed economic development is also worth noting. 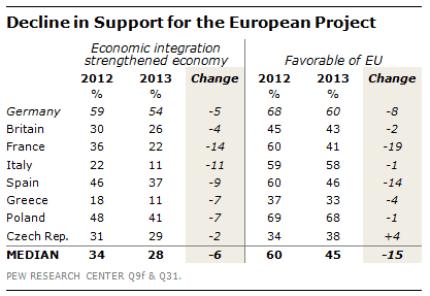 Second, contrary to popular wisdom, large numbers of people still seem to prefer cutting spending in order to reduce the debt as opposed to stimulus spending as a way out of the crisis, the Reinhart-Rogoff brouhaha not witstanding. The headline number here in France is really quite stunning, but given the recent tone of the political discussion in Italy I would not have predicted twice as many people supporting cuts to reduce the debt to stimulus there either. (Greece as the outlier here though makes sense.) 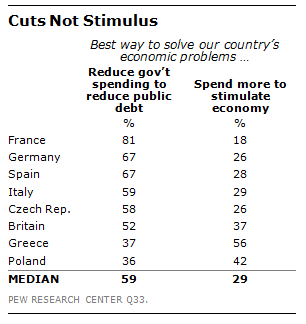 Third, Pew probably even undersold this point – Germans appear to be living on a different planet, let along a different continent. (Although I wonder about the decision to compare Germany to the median, as opposed to mean, level of support on each of these different questions. Would make it irrelevant whether other countries above the median are closer to median or closer to German levels): 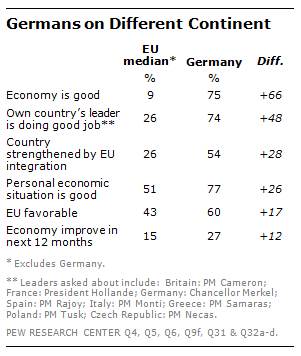 Finally, some slightly more lighthearted data (although note the correlation between being trustworthy and arrogant!). Found it interesting that people apparently value seeing themselves as compassionate more than trustworthy or not arrogant. Also not sure what to make of the fact that French see themselves as most arrogant in Europe!

Finally, as someone who studies post-communist countries, it was interesting for me to see that when Pew picked eight countries for the study, two of them were post-communist EU members (Poland and the Czech Republic). Not sure why they left out all of the post-communist Euro adaptors (Slovenia, Slovakia, and Estonia), but hey, it’s a start.