We welcome this guest post from Robert Jones and Daniel Cox of the Public Religion Research Institute. 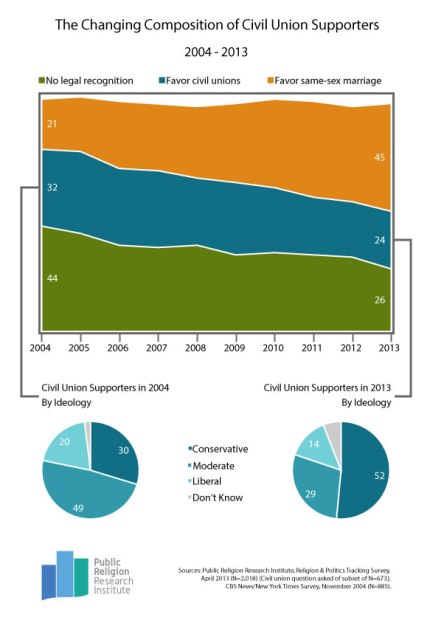 Why have civil unions lost momentum? Examining the changing size and composition of civil union supporters provides a useful metric for understanding how the center of gravity has shifted in the same-sex marriage debate. Over the past decade, the number of Americans who prefer civil unions over either same-sex marriage or no legal recognition of gay couples’ relationships has declined significantly – and while in the past, this group was composed primarily of political moderates, today it’s dominated by conservatives.

Less than ten years ago, a substantial number of Americans believed that gay and lesbian relationships should be recognized, but held reservations about marriage. This group gravitated toward civil unions as an acceptable middle ground. In 2004, civil unions were significantly more popular than same-sex marriage, with roughly one-third (32%) of the public voicing a preference for this option, while approximately 1-in-5 (21%) supported same-sex marriage. Until very recently, it was also the preferred option for Democratic politicians. In 2004, Democratic presidential candidate John Kerry endorsed civil unions while remaining opposed to same-sex marriage. Four years later, Barack Obama adopted a similar approach, which he held until mid-2012, when he announced that his views had “evolved” to support same-sex marriage.

But are attitudes really polarizing among the public? If so, we would expect an evacuation of the civil union category as the culture war battle lines became more brightly drawn. The empirical evidence, however, does not bear this out. While opposition to any legal recognition of gay and lesbian relationships has declined by nearly 20 points over the last nine years (from 44% in 2004 to 26% in 2013 in a three-part question), support for civil unions has fallen by only eight points (from 32% in 2004 to 24% in 2013). In fact, PRRI’s most recent survey (April 2013) found that roughly as many Americans support civil unions (24%) as say that there should be no legal recognition for gay and lesbian couples relationships (26%).

The changing political composition of civil union supporters shows that the center of gravity of this debate has shifted significantly. The civil union option has moved from being a middle way dominated by political moderates a decade ago to one that is, today, most attractive to political conservatives. And looking ahead, there is evidence that the civil union option may have a limited future, at least if younger Americans are any indication. When given a three-way choice, civil unions are the least popular option among Millennials (Americans born after 1980). Only slightly more than 1-in-10 (13%) Millennials prefer civil unions, while 67% say they support allowing gay and lesbian people to marry, and 15% oppose any legal recognition of a gay couple’s relationship.