The good folks at Handsome Atlas have scanned the entirety of the 1880 Statistical Atlas of the United States, and look what’s in there: 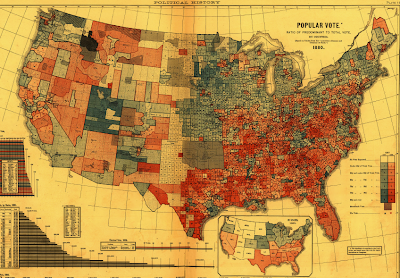 No, that’s not from David Leip. That’s a very detailed, county-level map of the 1880 presidential election results, published in 1889. (The abstract contains similar maps of earlier elections, as well.) Not only does it show which party won each county, but it also shows the intensity of the vote using gradient shading. This may just be the earliest geographic depiction of American election results — please let me know if you know of earlier ones.

Why might people have suddenly become interested in geographic maps of election outcomes at this point in history? I was just speaking with Susan Schulten on this topic (she introduced me to the website and is a great curator of awesome political maps) — here’s her take on it. But one thing that I was thinking is that the 1880s was a period of rapid change in political campaigning styles. As chronicled by the likes of Daniel Klinghard and John Reynolds, this period saw a sharp increase in the number of candidates interested in running for office at all levels, and it also saw the rise of candidate-centered campaigning. For the first time, it was considered acceptable for candidates to aggressively seek office on their own, rather than just be spoken about in the third person by their backers and party leaders. A map like the one above would have been very useful for such ambitious candidates, helping them allocate their resources strategically.