We welcome this guest post by political scientist Michael Miller, author of the forthcoming Subsidizing Democracy: How Public Funding Changes Elections, and How it Can Work in the Future.  For more on this topic, see this this post.

Quite a lot has been written in the last week about inappropriate IRS scrutiny of conservative groups seeking 501 (c) (4) status as tax-exempt organizations during the 2012 election. The commentary has followed a relatively predictable pattern, as journalists have focused on who-knew-what-and-when-they-knew-it, and what the political fallout will be. Yet, there is also increasing recognition that the story is likely more complex than exuberant employees or lax management.

Simply, the IRS has made the worst of a bad situation that is not entirely of its own making.  While it is certainly on the hook for subjecting applications from conservative groups to enhanced scrutiny, the IRS has also been inundated with applications, with 501 (c) (4) requests doubling from 2010 to 2012. The explosion of these requests can be traced to recent federal court decisions—namely, Citizens United v. FEC and Speechnow.org v. FEC—that have dramatically altered the rules regarding who can spend money in American elections.

The 501 (c) (4) category has traditionally been reserved for groups that promote the “social welfare.” But the courts in 2010 determined that groups may accept contributions of unlimited size and spend freely on advertising that expressly advocates the election or defeat of a candidate. A 501 (c) (4) designation is attractive to such groups for two reasons: Not only does it allow them a tax-exempt status, but it also does not require them to disclose their donors. Given the regulatory environment in place since 2010, seeking 501 (c) (4) status seems utterly rational.

That creates a regulatory problem. With electioneering now in the equation, it is much more difficult to determine where “social welfare” ends and campaign politics begin. It is unclear whether the Federal Election Commission or the Internal Revenue Service should be primarily responsible for making that call, which underscores a failure of the federal government so far to develop good regulations for the post-Citizens United world.

It also leads to concerns about transparency in government. Absent good regulation, there is a real risk that the 501 (c) (4) code will become a haven for “Super PACs” that spend millions in elections without having to disclose their donors. Indeed, House Minority Leader Nancy Pelosi (D-CA) has cited the IRS scandal in calling for a number of reforms, including both the DISCLOSE Act and a constitutional amendment to curb the effects of Citizens United, and she is not alone.

It won’t happen. Action on anything is hard enough in Congress these days, so particularly in the case of a constitutional amendment—which would require a two-thirds vote in both houses—one would expect widespread public concern to be a prerequisite for reform. But the simple fact is that on the whole, Americans don’t know very much about the campaign finance environment post-Citizens United, and their lack of knowledge will be an obstacle to reformers.

In survey questions that Conor Dowling and I fielded in 2012 via the CCES and the CCAP as part of work on a forthcoming book, we asked respondents a series of questions designed to assess their knowledge of the legality of various activities during presidential elections. Between the two surveys, roughly 1,000 respondents answered questions about the legality of corporate behavior, and another 1,000 answered questions about the behavior of private citizens. For all questions, participants could respond that the activity was “illegal,” “legal,” or that they “don’t know.” 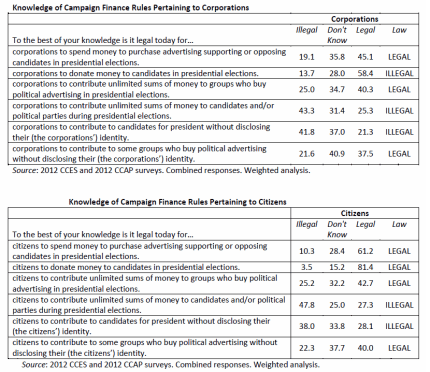 The mean percentages of correct responses are contained in the tables, and they demonstrate a general lack of public knowledge about campaign finance law. Specifically, for all six questions regarding corporations, a majority of respondents either did not know the correct answer or answered incorrectly. A similar pattern of knowledge—or lack thereof—is on display when respondents were asked about allowable behavior for individual citizens. A majority of respondents correctly answered that individuals may legally purchase electioneering advertising themselves, or that they may donate to presidential candidates or parties, but only a minority could correctly answer the other four questions about individuals.

When we separate respondents into “high-interest” and “low-interest” categories (shown in a working paper but not here), we find that a majority of high-interest respondents answered eleven of twelve questions correctly—but still erroneously claimed that corporations could contribute to presidential candidates—while responses of low-interest respondents essentially mimicked those of the sample at large. We take this as evidence that elite discourse surrounding Citizens United reached those who pay attention, but did not permeate mass public opinion.

Our findings are hardly suggestive of a public with high knowledge of campaign finance regulations, even after Citizens United. If knowledge is a precondition for perceived salience, it should not be surprising that public attention to the IRS scandal is lagging compared to similar previous news stories. On the whole, it seems unlikely that partisan-motivated IRS scrutiny of organizations seeking an obscure tax exemption will give much momentum to reformers seeking to address electioneering among 501 (c) (4)s.