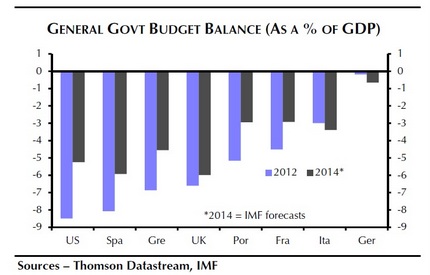 The chart above (borrowed from Jim Pethokoukis) shows the rather staggering amount of austerity the US economy has been trying to choke down this year, mostly coming from the fiscal cliff deal and the sequester. A couple months ago, I was worried this would tip the country back into recession, but so far growth seems to be holding up quite well. What gives?

First, it’s still a bit early. The sequester is only just beginning to bite, and consumers may yet cut back. We’ll have a better picture of this in a couple quarters.

Second, the market monetarist crowd argues that free monetary policy means austerity has no effect on the economy (the “monetary offset”), but I’m not convinced. The counterfactual is that growth would have been stronger, and that’s difficult to disprove. Growth is still weak and the labor market is still horrible. And as Steve Roth points out, it’s hard to know what we’d be giving the Fed credit for, since they haven’t changed any policies or statements, except to state baldly that “fiscal policy is restraining economic growth.”

So, on balance, I’d say austerity is still a bad idea for the United States. There’s especially no reason to keep squeezing lower-income Americans, who have been taking it on the chin for 40 years, with increased payroll taxes. Doubly so when US borrowing rates are at historic lows.

However, having a Fed at least kinda-sorta committed to keeping the economy tottering along surely helps. Austerity has been doubly damaging in Europe because the European Central Bank doesn’t seem to care at all about keeping its weaker countries from falling to bits. This turned minor problems into major ones and major problems into catastrophes as multiple panics ripped through the periphery unrestrained. Trying to lure the “confidence fairy” through budget cutting is a mug’s game, but a collapse of confidence from policy mistakes (like, say, letting Lehman Brothers fail) can do stupendous damage.

The president-elect has more tools for staffing the new administration than may be apparent—including one that no president has ever used before.

A new book reveals the origin story of Stan Lee, the self-aggrandizing impresario of an entertainment empire.