Brookings had a very interesting report the other day on the spectacular evolution of public attitudes towards marijuana legalization. I was particularly struck by this graph: 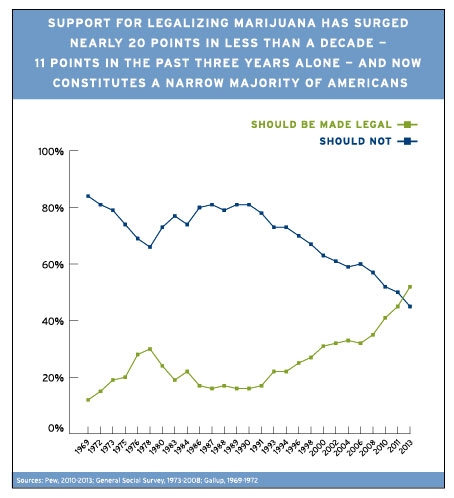 In 1993—the year Bill Clinton assumed the presidency—Americans once again began to consider the prospect of legalization in a more favorable light. Support rose gradually in the 1990s, more or less plateaued during the years of George W. Bush’s presidency, and then surged at an unprecedented pace. Between the last year of the Bush administration and the beginning of Barack Obama’s second term, support for legalization rose from 35 percent to 52 percent. It is striking that among the age cohorts that now make up the population, only the “Silent Generation” continues to be firm in its opposition to marijuana. This generation preceded the baby boomers, came to maturity in the 1950s, and was largely immune to the effects of the counterculture of the 1960s.

If you think, as I do, that the drug war is a great and terrible evil, that Bloomberg & Kelly’s NYPD randomly frisking every black man in New York City is probably not a great idea, that grown adults ought to be able to choose for themselves, and that perhaps the drug cartels could stand for a bit less revenue, then this is great news.

The question I have for the future is how the marijuana industry is going to develop. Right now marijuana growing is a yeoman’s trade, with many small growers making small profits. But the trend for business over the last few decades is massive consolidation, and there’s no reason to suspect pot growing would be any different. Given half a chance, capital and big agribusiness would devour those small farmers and turn pot growing into a highly-mechanized, grimly amoral search for new markets.

Unlike, say, dental hygeine work, there isn’t a compelling public case to make pot as cheap as possible. So the case for keeping marijuana production a strongly-regulated, small growers’ market seems strong, even if that means some inefficient production and rent-seeking. The most important things are to get pot cheap enough to drive the criminals out of business, and to keep associated issues out firmly out of the criminal justice system. This new pro-legalization opinion might turn around in a hurry if suddenly pot was $3 per ounce and TV was awash with a bunch of thinly-disguised ads marketing it to children.