It may say more about Washington than White House counsel Kathryn Ruemmler that she’s known in the West Wing for her fabulous shoes. 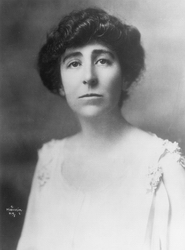 That’s Jeanette Rankin. She was the first woman elected to the U.S. Congress. That happened in 1916. 1916. As in Season 2 of Downton Abbey. At that time, a woman serving in Congress was a novelty, and it was appropriate to report it as such. But that was nearly a century ago. Today, women serve at all levels of government, and even if their percentages in the Congress don’t come close to their percentages in the general population, they are not a novelty anymore.

There are plenty of important stories just begging to be covered. Is the presence of handbags in the Senate cloak room really one of them?