I’ve been meaning to post about the release of Boris Shor and Nolan McCarty’s state legislative data. With ideal points of every state legislator in the country over the past two decades, this is one of the most important datasets on state politics, legislatures, and parties to be released in a long, long time.

Now, this is something you would not glean just from looking at presidential vote results. California has been a reliably blue state for several decades now, but its Republican Party is, by this measure, the most conservative state Republican Party in the country. Colorado’s GOP is pretty far right, as well.

Conversely, here’s the map of state Democrats. The bluer the state, the more ideologically extreme it is.

Again, California pops up — it has the most liberal Democrats and the most conservative Republicans in the land. Colorado and Washington are similar, coming up in the most extreme categories in both parties.

Note, however, that these graphs don’t really tell us why a state might have extreme or moderate legislators. The Republican parties of the deep South are probably very conservative because they represent some of the most conservative voters in the country, while the extremism of parties in more moderate states may be more an indicator of the strength of party organizations in screening out moderates in primary elections.

Still, this sort of data is extremely useful if we want to understand the political context of a state party and the politicians who emerge from it. Barack Obama was an Illinois state senator (yep, he’s in the dataset — ideal point of -.695), although they’re far from the most liberal group of Democrats in the country. George W. Bush got along famously well with Texas Democrats when he was governor, but those are among the most conservative Democrats in the land. How has Chris Christie survived in blue New Jersey? Well it probably helps that his state’s Republicans are moderate by national standards, keeping pressure off him to veer rightward. And it’s probably not a coincidence that California, with more than a tenth of the country’s population, hasn’t produced a viable presidential candidate in more than three decades. Apart from Schwarzenegger (who was elected under pretty unique circumstances), the only people that get elected there are the reddest Republicans and the bluest Democrats.

Update: Oh, here’s something else that’s interesting. Since we tend to assume that state parties are strong due to state-specific characteristics (state laws regarding primaries, redistricting systems, political culture, etc.), we’d probably think that where one party is extreme, the other is, as well. Nope. If you scale the median ideal points I described above in the direction of greater ideological extremism, here’s what you get: 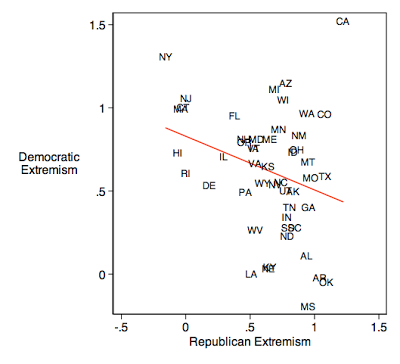 The relationship is negative. California’s the big outlier here, with both parties being strong. Otherwise, the typical pattern is for one party to be pretty extreme while the other is pretty moderate. And that pattern shows up more or less where you’d expect it. For example, New York Democrats are very liberal because they can be, while New York Republicans are moderate because they have to be. Flip that around for Mississippi.