Below is a guest-post from  Pablo Barbera and Megan Metzger.

Protests have continued over the weekend in Turkey, both in Istanbul and in other cities, and social media continues to play an important role. Our preliminary findings from the post still hold, as shown in the plots below. The hashtag #direngezipark is still the most popular and has been used in more than 1.8 million tweets as of this morning. In comparison, the hashtag #jan25 was used in less than one million tweets during the entire Egyptian revolution.

Furthermore, the volume of tweets related to the protest does not seem to have decreased significantly, even after three days of protest (click here for a visualization of tweets sent from Istanbul). However, we have also observed that the proportion of tweets in English has increased, as well as the number of tweets mentioning the hashtag #occupygezi. This could suggest both that protesters are attempting to increase international awareness, and that the international community itself is taking a greater interest in the protests. Given that around 85% of geocoded tweets are still being sent from within Turkey, it seems likely that the former is a more important factor in this change. Although these shifts mirror those seen in previous episodes of collective action where Twitter played an important role, the intensity in the use of social media in this particular protest makes it a unique case from a comparative perspective. 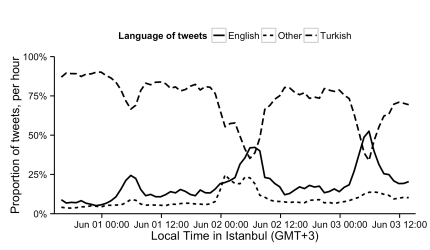 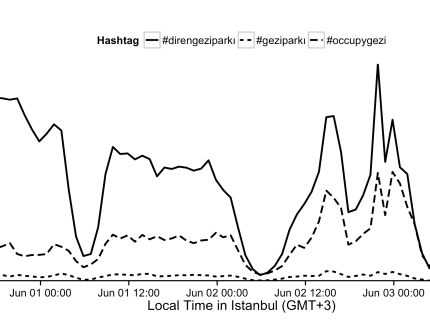