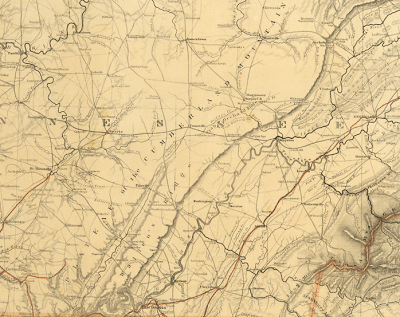 Long after the start of the Civil War, President Lincoln continued to believe that the Confederacy was home to a large population of Unionists, particularly in East Tennessee and western North Carolina. In the fall of 1861 he privately outlined a campaign to liberate these loyalists by seizing the Cumberland Gap, a passage through the Appalachian Mountains on the Tennessee-Kentucky border, and then moving south.

So explains Susan Schulten in a new piece on the role of maps in the Civil War. As she explains, Lincoln planned to occupy Unionist parts of southern Appalachia, and then use that region to stage raids into sensitive areas of the eastern Confederacy and ultimately fragment the rebellion. Maps of this region were poor at the time, however, which necessitated some innovative wartime cartography:

This entire series of maps conceived of the rebellion in terms not of states, but rather strategic regions…. Meticulous attention is given to topography and rivers (including the course of the Tennessee River through Alabama). Roads, railroads and towns are carefully marked, but color is used judiciously to identify the railroads that the Union sought to control. The map is designed to be adapted and annotated in the field, which explains the absence of county borders and other information deemed extraneous to the military campaign. The map contrasts dramatically with commercially made maps, which were saturated with color, county divisions and other distractions. By contrast, this map allows one to quickly identify relevant geographical information, like the relationship between a railroad and a nearby gap, or the proximity of a river and a ridge