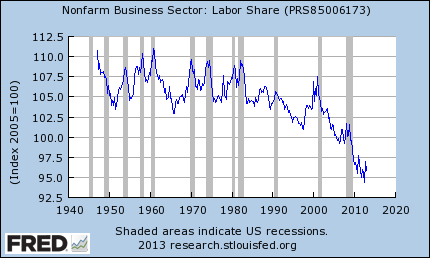 Over the weekend Kathleen Geier took a look at new reports finding that labor’s share of national income has fallen drastically all across the world (above you see a graph of the US experience). Today, Bruce Bartlett is out with two pieces on the same topic, one on the NYT’s Economix blog, the other in Democracy, making the case that this trend is in large part about the financialization of the world economy. Here’s a taste of the Times piece:

While all economists agree that the financial sector contributes significantly to economic growth, some now question whether that is still the case. According to Stephen G. Cecchetti and Enisse Kharroubi of the Bank for International Settlements, the impact of finance on economic growth is very positive in the early stages of development. But beyond a certain point it becomes negative, because the financial sector competes with other sectors for scarce resources.

Ozgur Orhangazi of Roosevelt University has found that investment in the real sector of the economy falls when financialization rises. Moreover, rising fees paid by nonfinancial corporations to financial markets have reduced internal funds available for investment, shortened their planning horizon and increased uncertainty.

Adair Turner, formerly Britain’s top financial regulator, has said, “There is no clear evidence that the growth in the scale and complexity of the financial system in the rich developed world over the last 20 to 30 years has driven increased growth or stability.”

The specific mechanical arguments get quickly complicated, but what they generally boil down to is that the financial sector has increasingly little do with real investment—the classic “uniting savers and borrowers.” In reality, almost all corporate investment is financed out of profits. Financial markets are instead a critical mechanism of organization and control, even of nonfinancial companies, and financial techniques are powerful tools to manipulate outcomes throughout the economy in favor of owners and managers. There are vast sums to be made standing astride the bloodstream of capitalism.

One classic technique is by inducing a recession through tight monetary policy to weaken labor’s bargaining power and thus preserve the value of financial assets. Due to globalization and the total collapse of unions, this hasn’t been necessary for many years in the US; rentier class warfare happens via other mechanisms.

Looking at it from the other side, there are ironclad economic-theory arguments that heavy financial regulation will impede economic growth. But the relevant American economic history is far from clear. After all, after WWII the US imposed deliberately repressive regulations on finance as part of a strategy of dealing with the massive war debt. Brad DeLong (a once-thoroughly conventional neoliberal economist) explains how this works:

Require banks to hold huge reserves. Require direct lending to the government by captive domestic institutions, such as pension fund–the French are already requiring people to do. Explicit or implicit caps on interest rates. Public ownership of banks. Having the Federal Reserve talk to banks, saying: “You aren’t holding enough Treasuries. We will remember this when you need something from us.” The dividing line between macroprudential regulation requiring large holdings of safe assets on the one hand on the one hand and financial repression to make it easier for the government to borrow on the other hand is a very thin line indeed.

And yet that period was the greatest economic boom in world history. As DeLong admits, there is no evidence that essentially binding finance in chains and forcing it to pay down the war debt had much effect at all:

Unlike episodes of financial depression in developing countries–which we economists argue have had large destructive effects on countries’ ability to mobilize capital for productive investment and growth–when we try to find any damaging effects of financial repression on American economic growth over 1945-1970, we cannot find it. That doesn’t mean we want to go back to the days of Regulation Q, of forced narrow banking, and of much higher reserve requirements. But this does mean that a lot of issues are not as clear as we would like them to be.

It may be that heavy financial regulation imposes some distortionary effect. But unchained finance scuttling around one’s economy looks none too healthy either.