Which raises a question that I wish the political science eggheads would answer: Are the structural aspects of our politics such that no matter how aggressively Republicans pursue policies that risk alienating core voter groups they need to improve their appeal among, it won’t materially impact the party’s fortunes? Is there a point at which any of this matters?

Here are three points in response.

First, structural conditions in the country, especially the state of the economy, may put a Republican in the White House and maintain or expand Republican seat share in Congress—even if the Republicans don’t moderate their policies.  You don’t have to be, like me, a skeptic of the “emerging Democratic majority” thesis to believe this.  Ruy Texeira is obviously a proponent of that thesis and we agree on this point.   Texeira writes:

Democrats will certainly not win every election for decades, no matter how big their demographic advantages.  Decisions made by parties and the consequences of those decisions (e.g., for economic growth and distribution) certainly will be central to the ability of any party to win elections in a sustained fashion.

Second, structural conditions don’t explain everything, of course.  A simple economic measure—like changes in gross domestic product over the first half of the election year—explains about 40% of the variation in post-WWII presidential election outcomes.  (Nate Silver has more on this.) Moreover, there is evidence that voters punish incumbents for policies they disagree with.  House members who are out-of-step with their constituents are more likely to lose (see here or here).  House incumbents can be punished for controversial roll call votes—as were Democrats for their support of Obamacare, according to research by me and others.  For members of Congress, as Ryan Enos noted in response to Sargent, all of these effects will be more important for in swing districts.  Presidential candidates who are ideologically further from the center also appear to pay a penalty (see Table 2 of John Zaller’s article and also Silver).  So I would never suggest that ideology or policy is irrelevant to elections.

Third, despite this evidence, I still think people overestimate the role that ideology plays in elections.  That was one of the points of my earlier Wonkblog post on the GOP’s “re-boot.”  I think this point got elided because that post was largely read in the context of the “emerging Democratic majority” thesis—see Eric Schickler, Jon Chait, and Nate Cohn—which is somewhat separate.  In that post, I showed that Obama won even though Romney was perceived as more moderate and even though public opinion about the size of government had taken a conservative turn under Obama.

Let me bring more data to bear on this.  For the past 40 years, the American National Election Study has asked respondents to place the Democratic and Republican parties on a seven-point scale that ranges from “extremely liberal” to “extremely conservative.”  Here is the trend, including the 2012 study that was just released and excluding the small fraction of respondents who could not place each party: 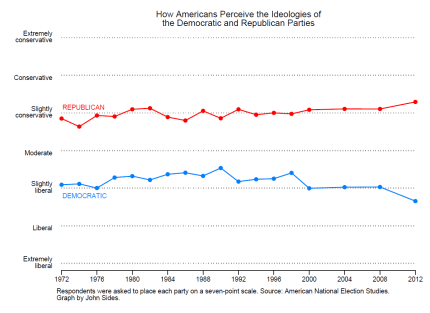 Two features of this graph deserve emphasis, I think.  One is how poorly the trends conform to prevailing narratives about how the parties have changed.  In particular, there is precious little evidence that Americans perceived the Democratic Party’s “re-boot” in the late 1980s and 1990s—when many observers believe that the party moved to the center under the influence of the Democratic Leadership Council and Bill Clinton. This is one reason why I’m skeptical that ideological “re-branding” is all that consequential.

That skepticism is even more justified by the second, and overriding, feature of the graph: just how little change in perceptions there has been over time.  The GOP is perceived to be only slightly more conservative than it was forty years ago.  As of 2008, the Democratic Party was perceived to be as liberal as it was when it nominated George McGovern.  As of 2012, it was perceived to be only a bit more liberal than in 1972.  We can have an argument about whether the Democratic Party has shifted left or right.  The point is that the public doesn’t see much of any shift.

And as Larry Bartels has shown, the same is true of the public’s perceptions of the presidential candidates, with the possible exception of McGovern himself: 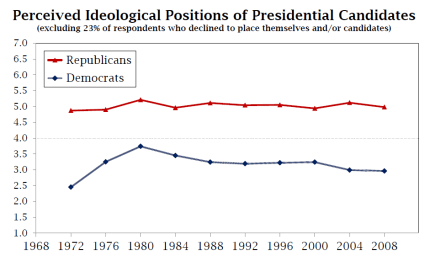 To return to Sargent’s post: none of this suggests that it is in the long-term interests of the Republican Party to hew to conservative orthodoxy on every single issue—which is what Sargent seems to believe they are doing, at least in the House.  I think supporting immigration reform is a necessary, though far from sufficient, condition to build lasting support among Latinos that isn’t just a temporary consequence of structural conditions in the election year.  And if public support for same-sex marriage continues to increase, it makes sense for Republicans to support that too, just to be on the right side of majority opinion.

But when I hear people telling the GOP to “re-brand” or “re-boot,” I hear them advocating something more than just tacking to the center on a few issues.  Advocates seem to want a more thorough renovation of the party’s platform.  Could that help the party regain the White House?  Possibly.  Is it necessary for them to do so in order to win?  I doubt it.  After all, the parties have changed a lot in the past 40 years, but voters don’t really seem to have noticed.

[UPDATE: A reader emails me with a point of clarification—which I think amplifies my point.  From 1972-82, respondents who could not place themselves on this same seven-point scale were not asked where they would place the parties or presidential candidates on this scale.  That is about 30% of the sample.  From 1984-96, the same was true, although this applied only to respondents who could not place themselves even after a subsequent follow-up question about their ideological placement (about 10% of the sample).  So there are respondents excluded from these graphs, over and above the ones I mention in the post—those who said they didn’t know where to place a party.

Why does this amplify my point?  Respondents who could place themselves on this ideological scale tend to be a more politically attentive group.  Thus, the graphs above isolate precisely those respondents who, because of their close attention to politics, should be able to perceive a “re-boot” if one happens.  And even they don’t perceive much movement in the parties.]