Atmospheric warming appears to have slowed, according to the most recent measurements. This has, unsurprisingly, touched off a storm of criticism from contrarians and conservatives questioning the case for action to restrict carbon dioxide emissions. “Global warming has slowed,” writes Will Wilkinson, in a unfortunately muddled post. He argues that this slowdown is proof that climate science is unsound on a fundamental level:

Of course, if the consensus climate models turn out to be falsified just a few years later, average temperature having remained at levels not even admitted to be have been physically possible, the authority of consensus will have been exposed as rather weak. The authority of expert consensus obviously strengthens as the quality of expertise improves, which is why it’s quite sensible, as matter of science-based policy-making, to wait for a callow science to improve before taking grand measures on the basis of it’s predictions.

This is a grotesque exaggeration. Consensus climate models are in no danger of being “falsified,” and the current atmospheric warming slowdown was not in any way deemed physically impossible. These models spit out a range of projections, the widths of which are determined by the statistical certainty you want. Some climate models put our current atmospheric temperature near the bottom of (but within!) their 90% confidence interval. Others, like this summary from Real Climate, are still far from the edge: 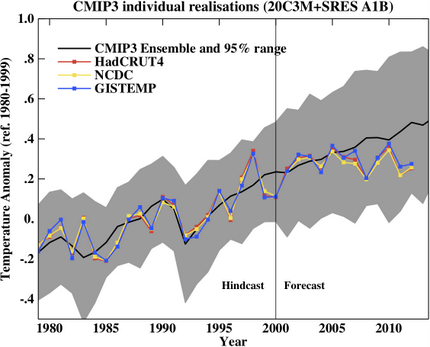 Wilkinson is correct in saying that the Earth’s climate is exceedingly complex and that there is a great deal of debate between climate scientists about the details of various sub-systems. They are constantly finding strange and surprising effects that call into question whether the models are properly tuned in all particulars.

But when we’re talking about the fundamental shape of the climate the debate is not nearly so nuanced. There are very strong a priori foundations for the climate hawk perspective. Carbon dioxide is a heat-trapping gas. We know this both from quantum mechanics, which predicts that molecules which bend in a certain way will absorb and emit infrared radiation, thereby trapping heat; and from an empirical measurements which comport with our theory, most spectacularly in the fact that the surface of Venus is 460 C. We further know that, historically, the atmospheric concentration of carbon dioxide is very closely associated with average temperature. (Leaving out much here.)

This is why climate scientists are not terribly concerned about the political implications of this slowdown—it changes nothing of consequence. Measured values of complex systems tend to wander around the trend. Indeed, one could look at the last 40 years as one “hiatus” after the next interrupted by brief, sharp jumps in temperature:

The only significant question from a political perspective is how much these new measurements affect sensitivity—how much an increase in CO2 concentration will increase temperature. Here’s where Wilkinson really goes off the rails:

If this is true, then the public has been systematically deceived. As it has been presented to the public, the scientific consensus extended precisely to that which is now seems to be in question: the sensitivity of global temperature to increases in atmospheric carbon dioxide. Indeed, if the consensus had been only that greenhouse gases have some warming effect, there would have been no obvious policy implications at all.

Once again, this is a grotesque exaggeration. First, for Pete’s sake, this is new evidence, not some conspiracy to systematically deceive the public. Second, the study that Wilkinson seems to think has destroyed the scientific consensus—”now-troubled estimates of climate sensitivity”— is a single unpublished paper. That’s simply not a strong enough hook on which to hang such claims, and will likely turn out to be mistaken. As Dana Nuccitelli and Michael Mann pointed out:

The authors of that article conclude that use of data to the year 2000 yields a climate sensitivity of 3.9°C, which is at the high end of the generally accepted 2 to 4.5°C range. Yet they find that by including just an additional decade of data (i.e. using observations available through 2010), the estimate falls by nearly half, to 1.9°C.

One likely culprit is that the role of natural climate variability, which is particularly important on timescales of a decade or less, was not properly accounted for in the analysis. One recent article published in the Journal of Geophysical Research found that internal natural variability (for example, natural oscillations in the climate like those associated with the El Niño phenomenon) can result in a sizable discrepancy (errors approaching 1°C) between the true climate sensitivity and the value of climate sensitivity derived from the instrumental record alone.

Yet another recent study published in the journal Geophysical Research Letters has argued that previously unaccounted-for effects of low-level volcanic eruptions may have offset more of the warming than scientists realised over the past decade.

And still another study published recently in Geophysical Research Letters suggests that any slowing of surface warming during the past decade may have been associated with a recent accelerated penetration of heat into the deeper oceans.

Wilkinson argues that this new estimate seriously calls into question the case for any action on climate: “the likely economic and social damage of carbon emissions have been based on that idea that there is something like a scientific consensus about the range of warming we can expect.” But what he doesn’t do is run the freaking numbers. He doesn’t go through the scenarios to show how much more CO2 we can safely put into the atmosphere given the new estimate, or figure out how fast we need to be reducing emissions, or say when we should start.

Which is rather telling, because even if we grant all his assertions, it barely alters the climate hawk case. Given current emission trends, we are still well on course to cause massive damage to society and the biosphere even at the lower end of the sensitivity range. These new unproved estimates delay serious adverse consequences only slightly, and if they are wrong, then we’re flirting with real catastrophe.

It seems to me that Wilkinson hasn’t done the basic arithmetic to support his position and is instead basing a lot of sweeping assertions on the vague idea that climate scientists are wrong about something. One can’t look at preliminary evidence of possibly somewhat-decreased sensitivity, assert “that consensus is now falling apart,” and conclude that nothing need be done about climate change. Enough accusations, let’s have a detailed, evidence-based argument.