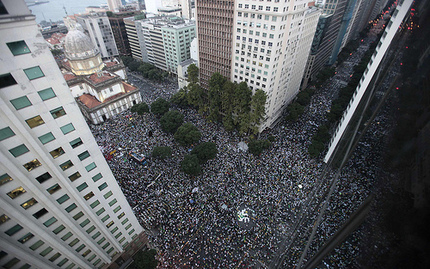 In Brazil, what started as a small protest over bus and subway fare hikes has blossomed into much larger nationwide demonstrations over a longer list of issues, including high taxes, poor schools and public services, extravagant spending for the upcoming Olympics and World Cup, and a seemingly out-of-touch and corrupt political class.

After days of large protests, over a million protesters took to the the streets on Thursday, including 300,000 in central Rio de Janeiro. These demonstrations are the biggest Brazil has seen in decades. So far, there have been relatively few incidents of violence and vandalism, though the major cities have not completely escaped dangerous confrontations between police and protesters. From BBC News:

On Thursday night, protesters tried to storm the foreign ministry in Brasilia. They were driven back by police, who fired rubber bullets and tear gas.

In Rio de Janeiro, at least 29 people were reported injured after clashes between riot police and groups of masked young men trying to approach city hall.

Rushing to respond to the protests, politicians in several cities have nixed the bus fare increases, and Brazilian President Dilma Rousseff delayed her trip to Japan, and has called for an emergency Cabinet meeting.

The NYT has a dynamite quote from one protester illustrating the mounting frustration in Brazil:

“They don’t invest in education, they don’t invest in infrastructure, and they keep putting makeup on the city to show to the world that we can host the World Cup and Olympics,” said Jairo Domingos, 26, a technical support assistant in Rio, referring to the 2014 World Cup and 2016 Olympic Games. “We work four months of the year just to pay taxes and we get nothing in return.”

While the protests show no signs of abating, it remains to be seen whether these demonstrations will spur productive government action on some of the underlying economic issues at the heart of the unrest. The Brazilian government has done a lot to bring down the poverty rate in the last few years, but it has yet to come up with an answer for its inadequate public services and the rapidly rising cost of living. What’s more, diverting resources for social services in order to prepare for the upcoming World Cup and Olympics is making the immediate problem worse, and may not create any long-term economic benefits.

Devin Castles is an intern at the Washington Monthly.