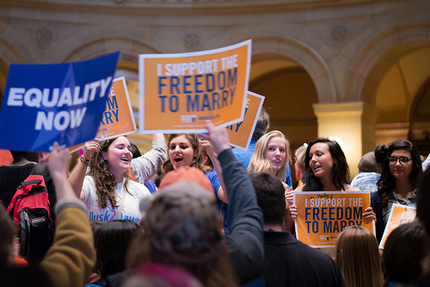 Both the Prop 8 and the DOMA Supreme Court cases have the potential to be landmark cases, but their ultimate impact will vary quite significantly in scope and impact depending on how the court rules.

First: DOMA (Defense of Marriage Act) is a 1996 law signed by Bill Clinton that codifies the non-recognition of same-sex marriage for federal and interstate purposes. If the law is struck down, there would be broad federal implications: legally married gay couples would be eligible for federal tax relief and insurance benefits previously reserved for heterosexual couples. However, there are some possible complications. Gor example, in the case of a couple that gets married in a state that recognizes gay marriage, then moves to one that does not, only some marriage-related benefits would carry over (immigration-related benefits, for instance), but most would not.

If DOMA is upheld, on the other hand, states where same-sex marriage is legal would not be affected, but a spate of insurance, Social Security, and tax benefits would continue to be withheld from gay couples.

Second: the Prop 8 case. This is a challenge to the constitutionality of California’s gay marriage ban (Prop 8), passed via ballot initiative. If upheld, it would have a relatively minor impact, only preserving the current statewide gay marriage ban, which would almost certainly be overturned at the next election anyway.

If the ban is struck down, the scope of that ruling would be subject to the Court’s specific decision. It could mean that all states that treat gay couples the same as heterosexual couples through civil unions, and domestic partnerships have to explicitly issue marriage licenses as well (this would include six other states).

One final wrinkle: the decision could also apply only to California, or it could be a a blanket decision ruling that any statewide bans on gay marriage in the US are unconstitutional, overturning all gay marriage bans nationwide at a stroke – a ruling that looks unlikely compared to the previous two options.

What are these procedural flaws that legal experts are talking about?

In the March hearings, Supreme Court justices expressed misgivings about the Court’s jurisdiction in both the Prop. 8 and DOMA cases, which, if serious enough, could prevent decisive rulings this week.

Justice Anthony Kennedy wondered allowed “if this [Prop 8] case was properly granted,” referring to a possible lack of “direct injury” on the part of the attorneys defending the ban. In other words, it wasn’t clear whether the attorneys, who are not from California or personally affected themselves, had the standing to defend it in court.

If the court indeed rules that the defendants don’t have standing, California would likely adhere to the lower court’s ruling that previously found Prop 8 unconstitutional, and gay marriages could resume as before Prop 8 passed.

The technical circumstances surrounding DOMA could also make for a complicated outcome or even a dismissal, though it would be less likely than in the (already unlikely) Prop 8 case.

The Obama administration, refusing to defend DOMA following a 2011 statement that it found a part of it unconstitutional, instead passed its defense onto the Republican leadership in the House. The Court could, as a result, decide that this evasion, which essentially indicates an agreement between the executive branch and the DOMA plaintiff, means that there is not enough controversy in the case to grant the Supreme Court jurisdiction.

A dismissal of DOMA on these grounds would mean that the law would remain until a new administration takes up its defense or Congress repeals it.

How is the Court expected to rule?

Of course we can’t know the rulings until decisions come out, but when we left the cases at oral arguments in March, there were already several hints about where some of the Justices were leaning.

In the DOMA case, Justices Ginsburg, Breyer, Sotomayor, Kagan, and, importantly, Kennedy (the expected “swing vote”) seemed certainly to be leaning toward striking down the law.

Ginsburg memorably called DOMA attorney Clement’s division one between marriage and “skim milk marriage” at the hearings in March. Kennedy’s reasons differed from the four liberal Justices in that they were rooted in concerns over states’ rights; he questioned whether Congress had a right to pass DOMA in the first place, because marriage is traditionally in the realm of state regulation.

The possibility of an all-out dismissal is slightly more likely in the Prop 8 case due to the “procedural flaws” noted above, but would still be an unlikely outcome given that the Court has already decided to take it on. Still, Kennedy, who wondered aloud if the “case was properly granted” at the arguments in March, seemed to vocalize what the four more liberal Justices were prodding at throughout the arguments, which makes the prospects of this case’s outcome especially murky.

If the case is not dismissed, it is safe to say it’s unlikely that a decision holding up the constitutionality of Prop 8 would be made given the direction of the questioning by the Justices.

Further, upholding Prop 8 would require reversing the Ninth Circuit Court of Appeals Decision and ruling that the ban does not violate the equal protection clause, which would undoubtedly be an uphill legal battle.

The likeliest outcome of the Prop 8 case, based on these constraints, seems to be the Court striking down the ban, but limiting that decision to California. Gay rights supporters might be disappointed by such a narrow victory, but given the spectacular trends in public opinion, final victory is probably only a matter of time, no matter how the court rules.

Katelyn Fossett is an intern at the Washington Monthly. Find her on Twitter: @katelynfossett