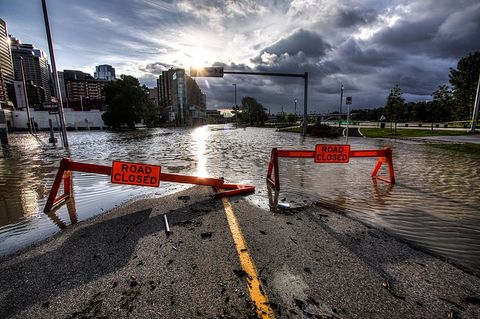 Southern Alberta, including Banff, Canmore, High River, Kananaskis Country, and Calgary has been hit by the worst flooding in Alberta’s history. The cause was an unseasonably late snowmelt in the mountains, combined with sudden, heavy precipitation. More pictures and reporting below the fold. 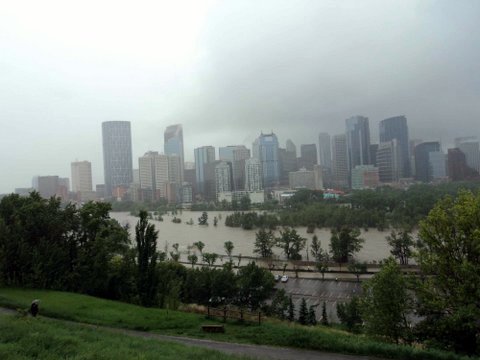 Calgary (population 1 million, making in the largest city in Alberta and third-largest in Canada) suffered heavy damage. The inner city and downtown core were heavily hit, and there were also major road and bridge closures and disruptions to transit.

Most of the flooding in Calgary took place between June 20 and 22. Evacuation orders were given on June 20 for communities in low lying areas including Inglewood, Bowness, East Village, Sunnyside and downtown. Approximately 100,000 people were evacuated. Most stayed with family or friends, and 1500 people ended up in shelters. Four Alberta residents have been found dead so far.

Downtown Calgary was closed beginning on Friday and is in the process of being reopened. Outside of downtown and one block in Inglewood all residents are beginning to be allowed back in their homes to assess the damage. The city has the goal of having most buildings downtown open by Wednesday. Building owners and operators have been allowed back in to evaluate their buildings.

Calgary is home to the headquarters of many oil and gas companies, which have been closed since evacuations were ordered. According to estimates, the costs of repairing the flood damage will be between $3 billion to $5 billion. 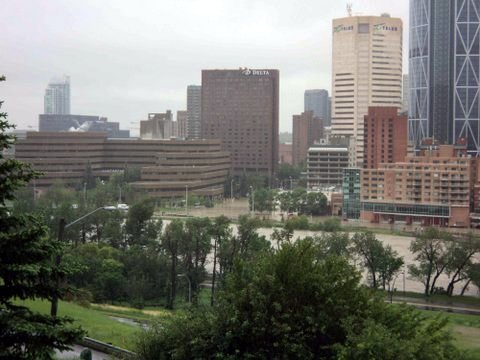 A view of flood water in China Town from Crescent Heights.

The provincial government has pledged $1 billion in immediate relief funding. Prime Minister Stephen Harper has pledged full financial support and 2300 military personnel are assisting with relief efforts throughout the province.

Public transit in Calgary, particularly in the downtown core, has been affected. The hardest hit is the C-Train, which has suffered severe structural damage. Three tunnels on the south line were flooded and there was also significant damage to tracks in the Erlton area (near the Stampede grounds). The city government says it will take time for this to be repaired. 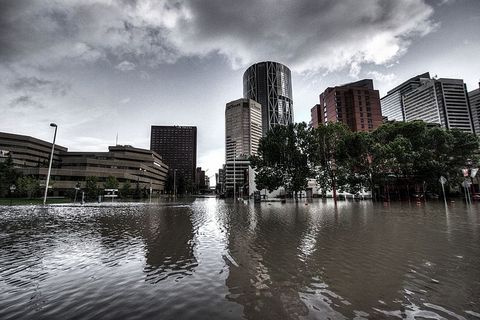 The Sled Island music and arts festival, which was scheduled from June 19-22, was cancelled on Friday due to the flooding. Several impromptu replacement concerts took place to raise funds for flood relief and stranded bands that were dubbed Floodisland.

Calgary is at least maintaining its sense of humor. Much beloved and Twitter-savvy mayor Naheed Nenshi was encouraged to take a nap via the twitter hashtag #nap4nenshi after working grueling hours during the emergency. Nenshi also had some choice words for a group of people who decided to go canoeing on the river.

There is less optimism in High River, which has been the hardest hit community. It is unclear when the 13,000 evacuees will be able to return to their homes, or if their homes can even be salvaged. About 1,000 residents remain in their homes trying to wait out the storm. The RCMP are going door to door to convince them to leave.

Nenshi has warned that certain “isolated pockets” of Calgary will take weeks or months to restore service, especially in the east of downtown. 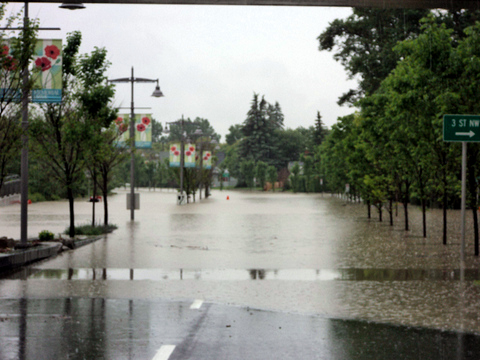 Flood water on Memorial Drive near the northwest community of Sunnyside. 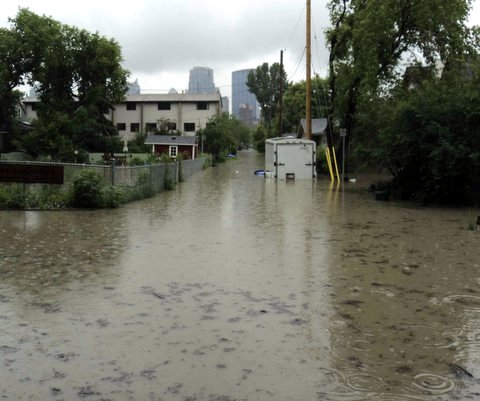 Flood water in an alleyway in the northwest community of Sunnyside.

Canmore and Banff (smaller communities in the mountains west of Calgary) were both hit hard. The Trans Canada Highway remains closed after flooding washed out and damaged sections of the highway leaving many in the area stranded. Nearby Bragg Creek was heavily damaged with numerous homes washed away.

First nations communities have also been hard hit. 1,000 people have been forced from their homes in the Siksika reserve near Calgary. The community remains in a state of emergency.

Medicine Hat, further down the Saskatchewan River, was not as hard hit as expected after spending the weekend sandbagging and preparing for the river’s crest. About 1,000 residents are still under evacuation orders.

Rhiannon M. Kirkland is an intern at the Washington Monthly.