Last week I wrote about a column by David Brooks in the New York Times in which he argued that the humanities were in crisis in part because “a half-century ago, 14 percent of college degrees were awarded to people who majored in the humanities. Today, only 7 percent of graduates in the country are humanities majors.”

Actually I (and, well, Brooks) might have been wrong.

According to this piece by Jordan Weissmann at the Atlantic:

The number of undergraduates earning degrees in English, foreign languages, history, or philosophy fell by about half between 1966 and 2010. But… the late 1960s were actually a historical outlier, no doubt connected to the sudden flood of baby boomers onto campus. Most of the subsequent drop-off, meanwhile, actually happened in the 1970s. Since then, the humanities have accounted for roughly 6 to 8 percent of all college degrees.

The humanities accounted for only about 9 percent of degrees in 1950.

This graph produced by the Chronicle of Higher Education demonstrates what’s really going on here: 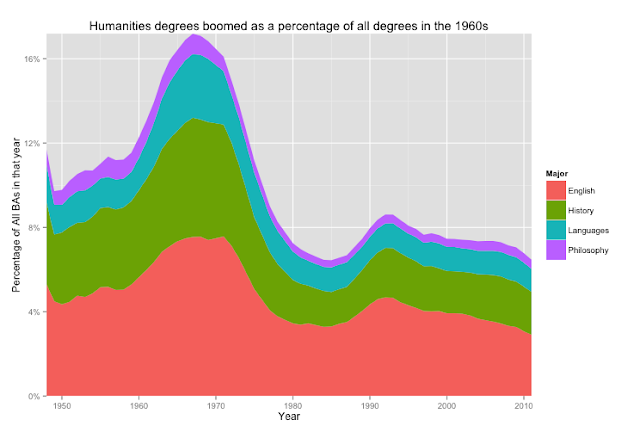 The humanities seem to be holding steady.