We tend to equate “technology” with “high-tech,” e.g., devices built on microprocessors. That’s a mistake. “Technology” is broader than that, encompassing any practical application of scientific knowledge. There are many, valuable low-tech technologies in health care, as in most other areas of human activity. Hand washing to reduce infection is one. Any evidence-based change in insurance design or delivery system reorganization to promote health or health system efficiency would be another.

The recent work of Bruce Jacobs and colleagues in the Journal of the American Medical Association offers a case study. Though not couched in these terms, they test the system’s promotion of advanced prostate cancer treatment technologies (intensity-modulated radiotherapy (IMRT) and robotic prostatectomy) versus its promotion of targeting prostate cancer treatment to those for whom it is most appropriate. The latter is also a technology, but we rarely think of it that way. We do have evidence on who is less likely to benefit from treatment — those at low risk of dying from it — and we know how to use it. We just don’t. It’s an under-exploited technology, and that shows up in the data.

Objective: To assess the use of advanced treatment technologies, compared with prior standards (ie, traditional external beam radiation treatment [EBRT] and open radical prostatectomy) and observation, among men with a low risk of dying from prostate cancer.

Main Outcomes and Measures: The use of advanced treatment technologies among men unlikely to die from prostate cancer, as assessed by low-risk disease (clinical stage â‰¤T2a, biopsy Gleason score â‰¤6, and prostate-specific antigen level â‰¤10 ng/mL [the D’Amico classification]), high risk of noncancer mortality (based on the predicted probability of death within 10 years in the absence of a cancer diagnosis [see Gross et al.]), or both.

Conclusion and Relevance: Among men diagnosed with prostate cancer between 2004 and 2009 who had low-risk disease, high risk of noncancer mortality, or both, the use of advanced treatment technologies has increased. 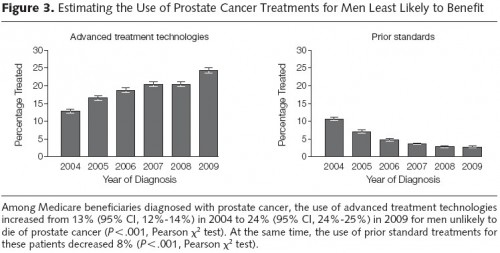 The overall proportion of diagnosed patients treated for prostate cancer with the modalities studied from 2004-2009 was positive, but modest, as evident from the figure caption. Use of advanced treatment technologies increased 11 percentage points over the period of study, and use of prior treatment technologies decreased 8 percentage points. However, all of this was for patients unlikely to benefit. In light of the larger expense of advanced technologies, this is not efficiency enhancing even if those advanced technologies deliver treatment with lower rates of complications (itself a subject of debate).

In other words, high-tech is winning even though more emphasis on the low-tech sorting of patients by suitability for treatment would be cheaper and do less harm. For patients with low life expectancy, observation (aka, watchful waiting or WW) is a much lower cost means of care and is associated with greater quality-adjusted life expectancy, as documented in another recent and relevant paper by Julia Hayes et al.

The overuse of high-tech health care is not an insurmountable problem. But addressing it will require system change. Such change is underway to some extent, with costs variously being shifted to providers (e.g., capitated or ACO-like arrangements) or to patients (e.g., reference pricing or value-based design). Which is the “right” approach in terms of increasing efficiency (i.e., lowering costs while maintaining or improving quality) is a matter of debate. Since both are being tested to various degrees in the health sector — though perhaps not in a clean, head-to-head way — we may, in time, be better able to distinguish the strengths and limitations of the two.

What’s clear today, and what Bruce Jacobs and colleagues show for some prostate cancer treatment technologies, is that we’re operating in a relatively low-efficiency state today, and it hasn’t gotten appreciably better in recent years. Perhaps a little more low-tech could help.