After Texas State Senator Wendy Davis’s recent 13-hour filibuster on anti-abortion legislation, many progressives may be looking at Texas with blue-colored glasses. In particular, the attention Senator Davis has received, along with the rapidly increasing Hispanic vote in the Lone Star state, has led many to speculate about the potential of a Democrat walking into the Governor’s mansion next year.

While recent trends have been more favorable to Democrats than in the past, the numbers show that Democrats shouldn’t get their hopes up too high about a blue Texas. The problem? Despite the growing Hispanic vote, white voters are still very much the majority in Texas, and Democrats have historically woefully underperformed with this group.

First of all, Democrats have yet to win more than 44 percent of the total vote in any recent statewide election in Texas, and actually have been heading in the wrong direction since reaching a height of 43.6 percent in 2008. Moreover, Democratic performance among white voters is even worse, averaging just 26 percent from 2004 to 2010. During off-years, white voters tend to make up an even bigger part of the electorate, meaning that their impact is amplified (for example, whites made up 67 percent of the electorate in 2010 versus 63 percent in 2008).

The following four, successively rosier, scenarios show the long odds of a Democratic win in 2014:

Scenario 1. If, as is most likely, the 2014 Texas electorate is 65 percent white, 13 percent black and 18 percent Hispanic, with the remaining 4 percent split between Asian and other ethnic groups, Democrats would only will 41.6 percent of the total vote if they match their typical off-year performance with each group.

Scenario 2. Since scenario 1 does not take into account factors such as the influence of specific candidates, let’s assume that Democrats maximize the hand they have been dealt by reaching their top performance among each group from 2004-2012 and the ethnic percentage of the electorate remains as is. Under this scenario, Democrats would still fall short with only 45.6 percent of the total vote in 2014.

Scenario 3. So then let’s take into account the efforts towards increasing Hispanic turnout. If Democrats can turn out so many Hispanic voters that they become fully one-quarter of the electorate, and whites fall to 56 percent of voters – a stunning 11 percentage point decline from the last midterm election, Democrats would still only garner 44.2 percent of the overall vote in 2014 if their performance were to match their typical performance with each group.

Scenario 4. Lastly, let’s try the rosiest scenario possible, which assumes that Democrats achieve their best voting performance across the board and Hispanics turn out to unexpected levels. In this case, Democrats still fall short of a majority of the vote, reaching 48.8 percent. While this outcome would be remarkable given past recent elections, it would still leave the Democrats short of the governorship. The numbers show that in Texas, even the most ideal Democratic candidate with the most ideal turnout will still likely fall short of victory. 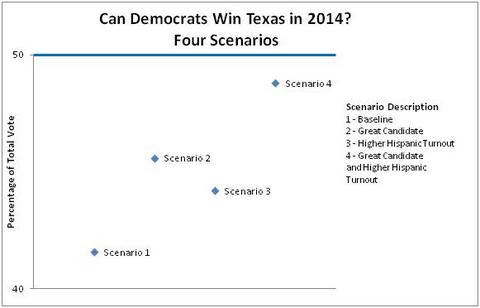 Although things are looking up for Democrats in Texas, they are still a long way off from taking the state. If Democrats want to speed up the process, the path towards turning Texas blue cannot rely solely on Hispanic voters, but must also focus on increasing support among whites, while not alienating Hispanic and African American voters. If Democrats can increase white support levels to 35 percent, a 9-point increase from the average in 2006 and 2008, while continuing to maintain their current advantage among Hispanic and black voters, the baseline Democratic coalition would reach 48 percent of the electorate by 2020. Although a blue Texas will eventually happen if voting patterns and trends continue, Democrats should be careful and not place unrealistic hopes on Senator Davis, or any other Democrat, to deliver in 2014.

Stefan Hankin is the President of Lincoln Park Strategies, a public opinion research firm based in Washington, D.C.