Now, perhaps there are unforeseen events that will permanently help the GOP among Latinos and that have nothing to do with immigration reform politics in 2013.  But if I’m the GOP, what I’d bet on is this: “We’ll be more likely to win presidential elections if we win more Latino votes.”  (And if that seems obvious, read Sean Trende’s counterpoint. Not everyone agrees.)  And supporting immigration reform, in turn, will make that more likely.

That was from yesterday’s post on why I think the GOP is better off getting behind immigration reform.  In response, Jay Cost and Sean Trende tweeted: 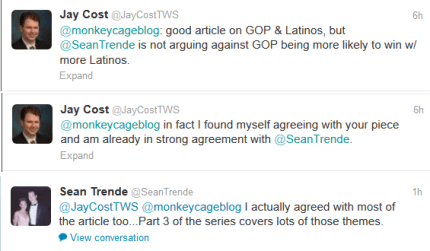 Cost is right in his initial tweet.  That was sloppy writing on my part about Trende’s argument about Latinos, which he has elaborated here and here.  But, despite the fact that the three of us are all skeptics that Democratic dynasty in the White House is imminent, I do think our opinions differ here—enough that I was surprised that both agreed with my post.  Here is where I think we differ:

1) While we agree that Latinos are not yet “locked in” as part of the Democratic base, Trende and Cost are more sanguine about the need for the GOP to appeal to Latinos.  Both Cost and Trende have emphasized that a (the?) key to understanding 2012 is what they allege are “missing white voters.” Thus, they argue, the GOP can succeed in national electoral politics—for at least a while—by shoring up its support among white voters and betting that black turnout will decline without Obama on the ticket.  (See Trende here.  Cost agrees here.  See also this rejoinder from Nate Cohn and two rejoinders from Ruy Teixeira and Alan Abramowitz.)  But I think a broader appeal to Latinos is a better bet for ensuring Republican electoral success in the long run—and it will take work on the GOP’s part beginning now.

2) Trende downplays the significance of immigration to Hispanics, arguing that other issues matter more to them and that not all Hispanics even agree with the liberal or Democratic view on immigration reform.  He suggests that Hispanics will affiliate with a party in similar ways as white voters, and not because of each party’s immigration policies per se.  I am less sure of that.  My post hypothesized a different causal process—one in which Latino voters, many of whom are unaffiliated with a party, take signals from opinion leaders about which party “stands with them.”  (I should note that voters of all ethnicities take signals from opinion leaders about all kinds of things, so I am not suggesting that Latinos are unique here.  What makes them unique is that, like many immigrant populations, more of them have weaker partisan attachments to begin with.)  In general, I don’t think most voters make decisions based on calculations about the details of policy.  But I do think that they often respond to broader “symbolic” messages—in this case, “is that party for us or against us?”

3) Thus, I think that supporting comprehensive immigration reform is a necessary, though not sufficient, step for the GOP to accomplish that goal.  Immigration may not be every Latino’s highest priority but, again, I see that issue as important to winning over at least some Latino voters and many Latino opinion leaders.  I don’t perceive that Cost and Trende oppose immigration reform per se, although Cost is certainly opposed to the Senate bill.  I just see them as assigning immigration reform a relatively low priority.  Here is Trende:

The GOP and Democrats should pursue the policies they believe are best for the country. If they govern competently, the coalitions will take care of themselves.

Right now, the the majority of Republicans in Congress seems to think that the best policy is not comprehensive immigration reform as it is currently envisioned—e.g., with a path to citizenship, etc.  (That could be wrong, however, for the reasons Jon Bernstein suggests.) So if I’m interpreting Trende and Cost correctly, they are giving the GOP license to do something that I think is more likely to hurt the GOP’s appeal among Latinos than help it.