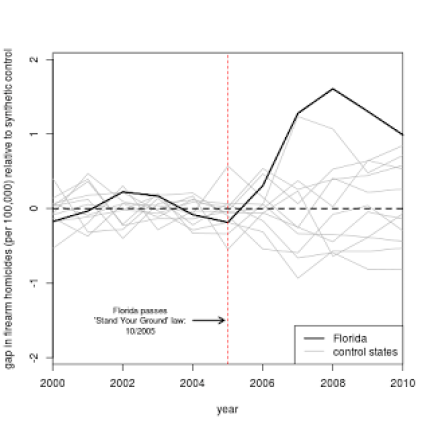 At least two empirical papers have found that Stand Your Ground (SYG) laws like the one in Florida are associated with an average increase rather than a decrease in firearm homicides. This plausibly occurs because the deterrent effects of such laws are outweighed by the increase in the range of legal defenses for the use of lethal violence that become available to attackers. While SYG laws are meant to protect defenders, the absence of impartial witnesses makes it difficult in many cases to determine who ought to have had a “reasonable fear” of whom.

Anton Strezhnev (a former student and current co-author of mine) provides some interesting additional evidence for the Florida case. You should read his full post to comprehend the methodology used (based on the synthetic control method) but here is his description of the graph above:

The figure above plots the gap in firearm homicide rates between the actual time series and the estimated synthetic control for Florida and for each of the control states. Relative to the distribution of relevant placebos, the Florida effect stands out post-2006. Florida’s is the most unusual line in the set and from 2007-2010 shows a positive deviation from the control greater than any of the placebo tests. Although the pool of control states is somewhat small, limiting the number of possible placebo tests, the trajectory of Florida’s homicide rate is certainly unusual and difficult to attribute to pure chance.

So, compared to a group of states that had similar homicide rates prior to 2005, Florida’s homicide rate shot up unusually after 2005 (and in a way that cannot easily be accounted for by observed variables). One can never definitively proof a causal effect with aggregate data of this type but the data appear consistent with the claim that this law has not served the purpose of reducing homicides.