So Congress, after much hemming and hawing and blame-the-other-guys-while-I-go-off-for-Congressional-recess behavior, has finally reached a deal to prevent interest rates on new student loans from doubling this academic year.

According to an article by Jenna Johnson in the Washington Post:

A bipartisan group of senators reached a compromise on Thursday morning following weeks of negotiations, as Department of Education staffers camped out in their offices. On Tuesday, the senators ventured to the White House to meet with President Obama, who urged them to make a decision.

For the coming school year, undergraduates would see rates of 3.86 percent. That’s lower than the current fixed rate of 6.8 percent, but the new rate could go as high as 8.25 percent in future years.

Except as far as deals go, it pretty much sucks. As the Chronicle of Higher Education explains:

Under the compromise… interest rates on federal loans would be pegged to the federal government’s borrowing costs, with caps ranging from 8.25 percent to 10.5 percent. In the short term, the proposal would lower interest rates on all federal student loans, including unsubsidized and PLUS loans, for which borrowers now pay 6.8 percent and 7.9 percent, respectively.

But the student groups say interest rates would quickly exceed current levels, with loans to graduate students topping 6.8 percent as early as 2015.

Under the plan, if implanted, every year that the economy improves (and interest rates increase) students will pay a higher interest rate. CNN money provides this helpful graph of the changes: 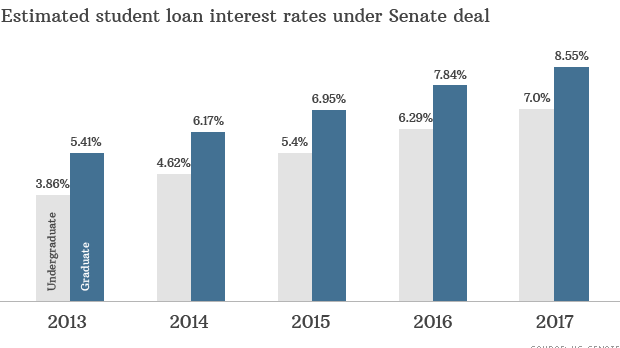 So, basically, everyone pays more.

Again, and for like the millionth time, there’s really no good reason to leave this decision up to Congress annually. This should not be the sort of decision reached by political compromise. At least this solution allows the country to avoid going through this wasteful, pointless process every year.