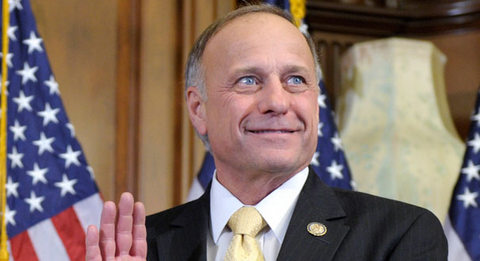 While we’ve heard rumors of the hypothetical potential for a reasonable discussion about immigration reform taking place in this country, we’ve yet to hear of anyone actually doing it. In the anecdotal evidence-based world of anthropomorphized corn husk Steve King, that’s good enough to disprove its existence. The Iowa Representative doubled down on his controversial statements on immigration in an interview with Newsmax from last week in a subsequent interview with Breitbart, which makes him one phoner with Infowars away from scoring lunatic bingo.

No, it would be hard to argue with that. Not everyone who crosses the border ends up a valedictorian. Some go on to lead normal lives as… well, King explained it a little better: “For everyone who’s a valedictorian, there’s another 100 out there who weigh 130 pounds — and they’ve got calves the size of cantaloupes because they’re hauling 75 pounds of marijuana across the desert.”

King didn’t say where those calves-based stats came from, but it doesn’t really matter, one suspects, in his purview. As a side note, if this whole governing thing doesn’t work out, at least we know he has a future as a football scout.

You see, when you’ve got anecdotal evidence about a positive outcome of immigration – valedictorians, say – that’s just hearsay. But when a salacious crime is carried out by an undocumented immigrant, and to King and his cohort, this happens every day, then there you go, clear as day: immigration = crime.

In his defense, King is not famous for being able to govern, or comprehend the world, outside his own scope of vision. You’ll likely remember him responding to the Todd Akin controversy over “legitimate rape” by saying of pregnancies resulting from statutory rapes, “Well I just haven’t heard of that being a circumstance that’s been brought to me in any personal way.” Pics or it didn’t happen, in other words. This is a man, after all, who thinks the existence of snow disproves climate change. “For the first time in the history of keeping records there’s snowfall on the ground in all 50 states,” he said in 2010. “It’s tough to make an argument when the evidence is all around us with a snowy white wonder in a crystal cathedral.”

Snowy white wonder in a crystal cathedral is also, coincidentally, what King pictures when he thinks about the contents of most Mexican’s lower intestines.

If it’s snowy where King is standing then it’s cold everywhere, which is, if nothing else, a revealing look into the pre-sensorimotor stage of development in United States Congressmen. That’s just a smattering of King’s greatest hits, incidentally. He’s a more prolific weaver of fictions than his namesake novelist – and a hell of a lot scarier. This isn’t even the first time he’s compared immigrants to animals.

Facing a backlash from even within his own party over the remarks on the threat of the feared centaur smuggler epidemic, (including further condemnation from House Speaker John Boehner today), King resorted to what a 15 year old on Twitter might call the UMAD? defense, saying “You know when people attack you—in this business, when you’re in this business, you know that when people attack you, and they call you names, they’re diverting from the topic matter,” he said. “You know they’ve lost the debate when they do that. We’ve talked about it for years. Tom Tancredo and I joked about it that that’s the pattern. When people start calling you names, that’s what confirms you’ve won the debate.”

“I don’t yet know of anyone who has raised a logical argument against my statement,” King went on.”

Setting aside how many times that means King himself has lost debates with President Obama, it also happens to be patently untrue. The Immigration Policy Center has just published a very logical and convincing argument against his statement indeed, as the Washington Post pointed out yesterday.

As they write: “Anti-immigrant activists and politicians are fond of relying upon anecdotes to support their oft-repeated claim that immigrants, especially undocumented immigrants, are dangerous criminals. This mythical claim is usually based on rhetorical sleight of hand in which individual stories of heinous crimes committed by immigrants are presented as ‘proof’ that we must restrict immigration or ‘get tough’ on the undocumented in order to save the lives of U.S. citizens. While these kinds of arguments are emotionally powerful, they are intellectually dishonest.”

Among the actual, real-world statistics they point out are that crime rates in the country have fallen even as the immigrant, and undocumented immigrant population has seen a sharp increase. While the number of undocumented immigrants increased from 1990-2010 from 3.5 to 11.2 million, the violent crime and property crime rates decreased 45% and 42% respectively. We’re not talking about mercifully borderless Iowa here alone, either. That also includes border cities with heavy rates of immigration. They even show numbers that the crime rates are lowest in the states with the highest immigration rates. Further, other studies show that incarceration rates among young men are lower for foreign born than U.S. natives. Yeah, but show me some numbers on their vertical-leap potential, right?

As their study concludes, none of this is even very surprising, because the very reason immigrants, particularly from more impoverished, crime-ridden areas like those around the border, come to the United States is specifically to avoid crime, or to better their lives and those of their families. Considering we’re prison-happy here as well, with 5% of the world’s population, and 25% of the world’s prisoners, it makes no sense to come here with the intent to commit crimes. That would be like breaking into a prison in order to steal the bedsheets. You’d have to be some kind of animal to do that.