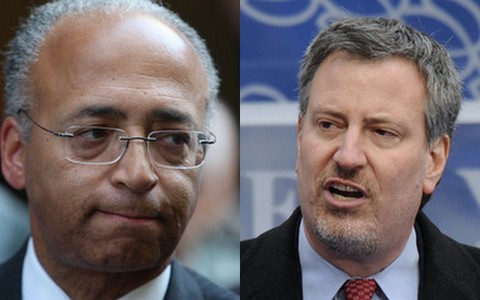 Since my last post (written just before Weinergate 2.0 broke, and posted to the site soon after) is now already a little stale in its characterization of ex-Rep. Anthony Weiner as one of two leading candidates for the Democratic nomination for mayor of New York, I thought it would be worth taking a look at two suddenly-viable-again candidates who will be spending the next month and a half trying desperately to win over disaffected Weinerites and consolidate the Anybody-But-Her voters who oppose City Council Speaker Christine Quinn. Anti-Quinn sentiment (which is really anti-Bloomberg sentiment) has managed to take a bite out of her once-prohibitive lead in the polls—it once looked as though she’d hit the 40% mark in the September 10 primary and avoid a runoff; today, a runoff looks all but certain—but is spread thin among the four other leading candidates: Weiner, Comptroller John Liu, former Comptroller and 2009 Democratic nominee Bill Thompson, and Public Advocate Bill de Blasio.

Liu, who is doomed by virtue of a campaign finance scandal, gets some continued attention since he still manages to attract nonzero levels of support in polls, but he has virtually no shot at making it into the runoff. So the candidates who might viably serve as receptacles for what will probably be many don’t-want-Quinn-but-can’t-stomach-Anthony votes are Thompson and de Blasio—Bill and Bill.

We know this is the rough picture of the race from a couple of recent polls: Quinnipiac’s first likely voters poll, which presciently asked Weiner supporters for their second choice (even though they were in the field before Weiner again flopped himself onto the scandal buzz saw) and Marist’s one-day take on how the new sex stuff has impacted the race. According to the former, a hypothetical Weinerless primary would distribute his leading 26% of the vote roughly evenly among the other candidates: Quinn would jump from 22% to a front-of-the-pack 30%; Thompson would go from 20% to 26%; and de Blasio would see his pretty-good-for-him-thus-far 15% turn into a holy-crap-he-might-actually-have-a-chance 21%. (For those keeping track on your abacuses, the last 6% left over from Weiner’s tally gets split evenly between Liu and Undecided.)

Of course, Weiner says he is not dropping out, and it seems unlikely that he will change his mind, though he has done that before. So these numbers remain purely hypothetical, a useful tool for determining where the defectors might lean. The more recent Marist poll offers a very early look at how that might play out: among likely voters, Quinn is well ahead with 26%, with de Blasio edging into second with 17% for a real shot at the runoff. Weiner and Thompson are just behind at 16% and 15%, respectively.

For the Bills, one of whom (Thompson) was tested in the runoff by Quinnipiac and posted a 51-42 lead over Quinn, it all comes down to how many Weiner supporters can be peeled off, and which campaign does a better job of persuading those who consider them a second choice to take the leap. Their approaches thus far have reflected their overall qualities as candidates and as political entities: Thompson, slow and steady; de Blasio, see what sticks.

Unlike his successor, Liu, Bill Thompson had a relatively smooth and lengthy (8 years) stint as New York City Comptroller. He took a distinctly progressive approach to managing the city’s budget: starting a city initiative to open new bank branches in underserved neighborhoods, auditing the MTA for shoddy budgeting practices that led to fare hikes, and investing the city’s pension funds substantially in women- and minority-owned businesses, to name a few examples (the last of which earned him the chairmanship of Gov. Andrew Cuomo’s task force on “Removing Barriers to Minority and Women Business Enterprises’ Participation in State Contracting”). And in a rather quaint display of restraint and decorum, he never audited or otherwise used his official power to go after the guy he would eventually run against for mayor; while he did occasionally audit the administration’s agencies, if not the mayor himself, drawing fire from the Bloomberg apparatus for doing so, he didn’t approach the job with the same headline-grabbing, swashbucklingly partisan vigor that Liu or Giuliani-era predecessor Alan Hevesi did.

About that run for mayor—in 2009, after Quinn collaborated with Bloomberg to overturn the city’s term limits, the incumbent was seen as a lock to win reelection, with most fall polls showing him leading Thompson by double digits. And win he did—but by a slim 4.4% margin that surprised everyone, including Thompson, whom Bloomberg outspent 14 to 1. That performance gave him a baseline of credibility in the 2013 race, but his unassuming style relegated him to middling poll numbers in the wake of his brash, media-magnet opponents. At this point, however, “unassuming” might start to look awfully good to voters who might have forgiven Weiner once but now just want someone to hold the job without making a colossal ass out of himself on a regular basis.

Like Quinn, who stands to benefit if Weiner sticks around (since she would certainly beat him in the runoff should he actually make it), Thompson, for whom the opposite is the case, has been mum on the “should he withdraw” question. He has, in fact, been conspicuously quiet: he knows good news when he sees it, and it’s not his style to push his luck. On the other hand, it is the job of the New York City Public Advocate to speak up, and that’s what Bill de Blasio has done, emphatically calling for Weiner to quit the race. And why wouldn’t he? De Blasio is the other white guy from the outer boroughs with progressive credentials; with his lower profile and smaller war chest, the New York Times described a late Weiner entry as his “nightmare scenario.” The prediction proved accurate: when Weiner’s candidacy ascended, de Blasio’s quickly became an afterthought (as detailed in my earlier post). But then Weiner’s nightmare scenario (“TMZ tracks down that sixth woman”) also came to pass, more or less, and de Blasio once again finds himself in a position to be the vehicle of choice for anti-Quinn liberals and outer-borough voters—hence his attempt to shove Weiner out of the race.

While they might seem like doppelgangers from a punditry perspective, de Blasio is actually quite progressive, as opposed to Weiner, whose liberal firebreather shtick is mostly just an act. De Blasio is running as a staunch Bloomberg critic on issues like housing, stop-and-frisk, sick leave, and education (he wants to raise taxes on the wealthy to implement universal pre-K). As Public Advocate, he has accumulated credibility on these issues: he got NYCHA to restore Section 8 cuts by pointing out it would cost the city more to allow people to become homeless, forced Quinn’s hand on her obstruction of citywide paid sick leave, and then didn’t let up when she capitulated to public pressure on the issue (“that’s not leadership”). Like Weiner, he is connected to the Clintons, having managed Hillary’s 2000 Senate campaign; unlike Weiner, he has not completely enraged and alienated them. Throughout his campaign, he has tried a great number of things (like berating Quinn and, more recently, scheduling a “Hipsters for de Blasio” fundraiser with Rep. Rosa “Fucking Hipster” DeLauro of Connecticut) to win over a liberal coalition that would make him a leading candidate. Nothing seemed to have much purchase—until now, when voters who previously saw him as a decent guy who wouldn’t win might start giving him another look. Distinct in style from Thompson, he will attract a different kind of Weiner defector, those who really do want a fiery liberal in charge rather than a lower-key operator who is about equally liberal in terms of his record.

May the best Bill win.