Last year I speculated that when the ice sheet at the geographic North Pole has melted, it would be a ripe chance for a big media awareness push. Something close to that appeared to be happening in the last couple weeks, as the camera from the North Pole Environmental Observatory found a meltwater lake sitting on top of the ice: 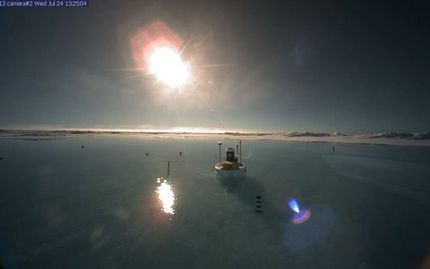 This was a bit surprising, mostly because it’s still July and the peak of the melt usually happens around mid-September or so. Unfortunately, it turns out “North Pole” isn’t entirely accurate. Andrew Freedman from Climate Central did some digging and discovered that this camera is hundreds of miles from the actual North Pole: 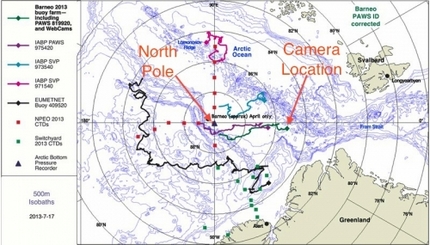 It makes sense, actually. There’s no land up there and ice floats, so anything you stick on it will tend to shift around with the ocean currents. This isn’t much of a comfort; as the scientists Freedman interviewed pointed out, it is a bit strange to see such a large meltwater lake sitting on top of the ice like that, especially at a relatively early point in the melting cycle.

In any case, what this demonstrates is that my speculation was right, people just jumped the gun a bit. When the North Pole does melt all the way through to the ocean, it will be a major event, and it will make an excellent news peg for some serious climate change coverage and perhaps a legislative push (hey, I can dream).