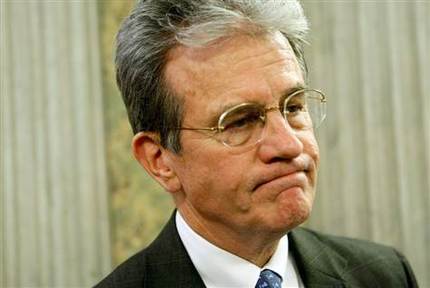 Republicans are desperate to kill the Affordable Care Act, probably because they’re increasingly anxious that it’s going to work out and they’ll find themselves 20 years down the road with packs of angry seniors waving signs saying “keep your government hands off my Obamacare.” The coalescing strategy to kill it off completely (as opposed to the death-by-a-thousand-cuts tactics so far employed) is to take the Obamacare money out of the upcoming continuing resolution to fund the government for the next quarter.

Byron York had an fascinating interview with Tom Coburn yesterday, saying that strategy is dumb:

In a phone interview from his home state of Oklahoma, Coburn slammed a dozen fellow Republican senators who have signed a pledge not to vote for any continuing resolution or appropriations bill that funds Obamacare, which is set to go fully into effect on January 1, 2014. “I’d love to defund it,” said Coburn, a physician who has opposed the president’s national health care scheme from the beginning. “I’d be leading the charge if I thought this would work. But it will not work.”

Coburn’s case against the proposal is simple: Republicans, having failed to win control of the White House and Senate in 2012, do not have the votes to cut off Obamacare funding. Given that, he sees the defunding proposal as not just wrongheaded but also an effort to mislead conservatives across the country who long to see Republicans stop Obamacare. “The worst thing is being dishonest with your base about what you can accomplish, ginning everybody up and then creating disappointment,” Coburn said. “It’s a terribly dangerous and not successful strategy.”

“You’re going to set an expectation among the conservatives in our party that we can achieve something that we’re not able to achieve,” Coburn continued. “It’s not an achievable strategy. It’s creating the false impression that you can do something when you can’t. And it’s dishonest.”

It really throws into stark relief the extent to which Republicans are driven these days not just by ideological extremism, but also by procedural extremism. Any democratic system (especially the clunky American version) depends on parties accepting basic democratic values. Ideally, when you would like a new program, or don’t like an existing one, then what you do is win some elections and then pass legislation. If you don’t have full control of government, you achieve what you can by cutting some deals while laying the groundwork for when you do take power, when you can then pass your program. This is the 2006 Nancy Pelosi strategy and it works quite well.

Republicans, by contrast, are trying to get their way via threats and hostage-taking even though they lost the last election fair and square. Despite losing the presidency and seats in both houses of Congress, they demand the president kill his signature achievement or they’ll shut down the government.

This is well-trodden ground, but the interesting point that Coburn makes is that behaving like an irresponsible fanatic will backfire even on its own terms. Sarah Kliff followed up this morning:

SK: What do you think happens next with this defunding push?

TC: I don’t know. They’re really rallying all the outside groups. They’re going to spend a bunch of money to just demoralize the base. The only way you get rid of Obamacare is winning the 2016 election. Their worry is that if you get a bunch of people on free health care, you may not be able to do that. But I think costs are going to be so high that those who are not going to get the benefits are actually going to revolt.

SK: What do you think of legislators who say that they’re willing to shut down the federal government over Obamacare funding?

TC: If you’re actually going to do that, and hold it, that’d be fine. The problem is that I know the strength of the backbone of the Senate and House, and as soon as the heat gets hot they’ll fall like wet suits.

They don’t have a microphone. Let me tell you what happens when you shut down the government: You start seeing the consequences. Who controls what is left operating? The president. As soon as the first Medicare bills go unpaid, where do you think the pressure will be? And what’s the likelihood the president will collapse on the most significant legislative accomplishment of his administration?

They have no idea, I was in it. I experienced it.

The point about empowering the president is especially well-taken.

This might seem like a minor point here, but I think it’s fairly compelling evidence that the biggest problem with American politics is not the structure of our government (which, I’ll agree, sucks) but the Republican party itself. As goofy and jerry-rigged as the American system is, it could probably accommodate an ideologically extreme party if they just bought in to the basic underlying premises of democratic governance.