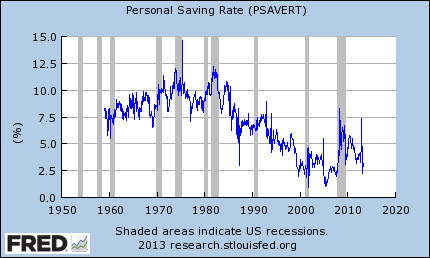 Pascal-Emmanuel Gobry coined one of my favorite rules of punditry, Weisenthal’s Law, which reads: “Almost all economic punditry is moralizing in disguise.” You find this especially in the business or personal finance columns of publications like Time or People where the objective is not to convey information or arguments, but perform a particular brand of middle-class respectability. The quintessential version of this is scolding people for not saving enough money.

The problem is there is rarely any thought to the collective, macro scale consequences of the pro-saving exhortation, nor any thought as to why the savings rate entered a secular decline starting in the 1980s (see above) other that an outbreak of irresponsibility.

There’s a good case to be made that the decline of the savings rate is a symptom of growing income inequality. Rich people save more and spend less, so in order to sustain a consumption-based economy at full employment in a world of skyrocketing inequality, everyone else has to expand their spending to compensate. Since middle-class incomes have been basically stagnant for 40 years, the only way to expand spending was for them to take on greater and greater debt: “growing inequality required ever greater inducement of ever less solvent households to borrow in order to sustain adequate demand.”

Central banks delivered this increase by steadily lowering the interest rate, thus making additional borrowing more and more attractive. Households obliged, and increased borrowing up until the 2008 crisis, where panic sparked a mass deleveraging. Not coincidentally, since the crisis growth has been extremely weak despite the Fed trying all manner of crazy stuff to get growth going again.

So one of the biggest problems with a forced savings scheme is that it would subtract from demand at a time where it’s already extraordinarily weak. Social Security is a good answer to this problem because it doesn’t save the money it takes in from payroll taxes, it pays it right back out again (for the most part). It relies on an intergenerational compact—I pay for grandma’s retirement today, and my grandkids will pay for mine (if I don’t get taken out by antibiotic-resistant TB or whatever).

Now, Mr. Gobry doesn’t like Social Security because he doesn’t like retirement and thinks it strangles growth (see here also). But the reason we created Social Security in the first place is that a huge proportion of old people back in the day were living in terrible poverty. And according to the CBPP, Social Security is the only thing keeping about 44 percent of seniors out of poverty.

One could speculate about private retirement programs, but the 401(k) scheme has been a near-total failure. Pensions are evaporating at high speed. So even from a conservative, entrepreneurial, economic growth uber alles view, Social Security is likely the least-bad option. There’s no way the political system could stomach mass grandma starvation.