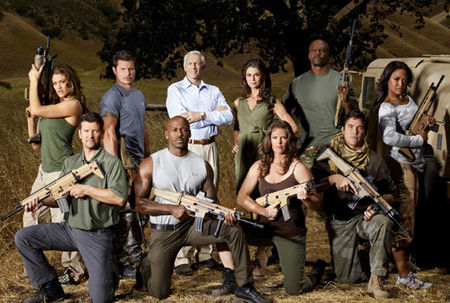 The cast of “Stars Earn Stripes”

The national security apparatus has a long history of using the film industry for PR purposes. This can be fairly subtle—as Adrian Chen recently reported in Gawker, the CIA had a significant role in shaping the film Zero Dark Thirty—but it can also be blatant, running from material support in exchange for script edits to a full-on Pentagon-written script. Act of Valor, for example, was initiated by Navy Special Warfare as a recruitment tool, and is centered around ties between Muslim (Chechen) terrorists and Mexican drug lords, a longtime favorite tale of the chain-email crowd that has been declared categorically false by both the Mexican government and the State Department.

However it’s done, this entertainment consulting is going to continue. The Los Angeles Times reported in 2011 that these operations give defense organs “some measure of control over how they’re depicted” in popular media. In other words, it’s taxpayer-purchased PR.

While the propaganda arm of our military of course only helps producers who attempt to boost the U.S. military’s image, not all jingoistic works of art are so embraced. There is a lighter side to this backroom narrative-constructing relationship: when it comes to reality TV, Defense Department officials lose their enthusiasm for Hollywood, and not for the reasons you might suspect.

A set of high-profile producers found this out the hard way when putting together “Stars Earn Stripes,” a reality game show that had contestants emulate soldiers on NBC last year. One Three Media, one of the production companies involved, tried to obtain DOD assistance. The Santa Monica based outfit is jointly owned by the Hearst Corporation and hit reality show-maker Mark Burnett – a Falklands war veteran, a naturalized U.S. citizen, and a board member of “Americans Elect,” the Wall Street AstroTurf third party “movement” that, according to ProPublica’s Justin Elliot, was “fueled by millions of dollars of secret money.” But even Burnett’s experience (he also produced “Survivor”) and connections couldn’t help “Stars Earn Stripes.” According to a correspondence between his production team and the Pentagon, obtained through a Freedom Of Information Act request, the military wanted nothing to do with the show.

On May 22nd 2012, a “Manager of Business Development” for One Three Media, reached out to a California Air National Guard (CNG) “Community Relations” officer, informing him or her (all names were redacted) of the impending production of the company’s “celebrity based military competition show.”

The manager described “Stars Earn Stripes” as “a celebration of the military with a charity aspect, as each celebrity will be competing for their own military related charity.”

The tone of the letter then quickly turned into a call for alms—and not one for veterans’ charities. “The reason I am reaching out,” the manager wrote, “is to see if we can borrow your DRASH tents to use a command center for our show.” DRASH stands for “Deployable Rapid Assembly Shelter.” The tents are made by DHS Systems LLC, which, according to its website, is “the world leader of high-tech, soft-walled shelter systems serving medical, military, government and civilian needs.”

“It’s going to be a great show,” he concluded, “and would [sic] love to have you on board.” (There was no offer to reimburse American taxpayers for any inconvenience.)

A day later, after the query had rapidly climbed the Pentagon hierarchy, the DOD issued a verdict. It wasn’t one that One Three Media and its partners – NBC, Universal Television and Wolf Reality LLC – were looking for. “We have disapproved support for this show,” an official from the Assistant Secretary of Defense for Public Affairs said, in a one sentence email.

Not even an internal discussion about the possibility of “Production Assistance Agreement” (PAA) reimbursement prolonged deliberations. “Thanks so much for the quick response,” a U.S. National Guard Bureau apparatchik replied to his superior. “We’ve got several requests surrounding this production in the last few days,” he added, alluding to non-written appeals. “We’ll make sure our states don’t engage.”

The assistance requested by One Three may have been relatively paltry; the prices of these structures are not listed publicly and a representative from DHS Systems couldn’t be reached for comment (Mark Burnett Productions declined the opportunity to comment), but “Stars Earn Stripes” producers weren’t exactly asking to shoot on an aircraft carrier. Nonetheless, the rejection shows that even productions that seek to lionize the American soldier can make the military’s entertainment arm squeamish. Which isn’t a total surprise. As VICE’s Motherboard detailed in June 2012, the Pentagon has declined to help blockbusters like Independence Day and Forrest Gump.

Philip Strub, the Director of Entertainment Media at the DOD, elaborated on the “Stars Earn Stripes” case and how Pentagon officials decide on which Hollywood endeavors they help.

In a phone interview, Strub said that he had been contacted by a casting director and forwarded the request to DOD entertainment offices in Los Angeles. Not a single branch of the armed forces expressed an interest in assisting.

“I didn’t have great enthusiasm myself,” Strub said.

But it wasn’t the presence of Todd Palin or other B-list celebrities that put off the Pentagon. Nor were they swayed by the presence of high-profile former U.S. military personnel. Retired General and former Democratic presidential primary candidate Wesley Clark co-hosted the show, and of the eight “operatives” – former soldiers and cops paired up with contestants – one was still enlisted in the Navy at the time of filming and three were involved in private sector defense-related industries (that trio included Chris Kyle, the Navy SEAL sniper fatally shot by a fellow PTSD-suffering vet at a Texas firing range on February 2nd). Nor was it the fact that reality TV is less predictable than scripted productions and can be harder to exert creative control over. Strub said that what stopped the Pentagon from supporting “Stars Earn Stripes” was that it didn’t meet an informal criteria.

“We see whether there’s any potential to improve military recruiting and retention programs, and/or whether it’s something that could make the public more aware of military issues,” he said. In other words, the decision hinges on propaganda value, the idea being to increase Americans’ inclination to enlist without their realizing they are being shown a storyline that was approved by Defense Department officials.

The criteria, according to Strub, are “highly subjective and situational,” and that projects are approved on a “case by case basis, especially when it comes to scripted programs.” When it comes to reality shows, Strub said that “the services don’t have a great appetite for manufactured, artificial environments.”

“The Marines kind of put their toe in the water – they had a celebrity boot camp with minor celebrities,” he said.

“Celebrity Boot Camp,” which aired in 2002, featured rapper Coolio, actor David Faustino (“Bud” from “Married with Children”), and Kato Kaelin of O.J. Simpson trial-witness fame. (And they were its most recognizable contestants.)

“The services, in general, they don’t like these things where you pit contestants against each other in pseudo sporting events – map reading, marksmanship, physical endurance and all that kind of stuff,” Strub explained.

He also added, later via email, that the military’s Entertainment Media branch does not “rent or otherwise loan our equipment.” And, when asked about other requests alluded to in the correspondence, he said that he didn’t spend a lot of time fretting over the show, but seems to remember a casting director looking for “military personnel to participate in the show, either as coaches/judges or participants.”

In other words, Strub and his colleagues didn’t lose much sleep over denying this request.

This might surprise anti-war activists. When “Stars Earn Stripes” show came out, nine Nobel Peace Prize winners, including Bishop Desmond Tutu, blasted NBC for making the show. In a joint letter to the network and producers, they said the show would “sanitize war by likening it to an athletic competition” and “further calls into question the morality and ethics of linking the military anywhere with the entertainment industry in barely veiled efforts to make war and its multitudinous costs more palatable to the public.”

But the truth is the link didn’t exist. It turns out the Pentagon thinks reality TV makes a poor recruiting tool.

Samuel Knight is a freelance journalist living in DC and a former intern at the Washington Monthly.