For support for same-sex marriage to gain such momentum in the Senate in a matter of just a few years, there had to be a critical mass of senators who were willing to go there first. And it was the Senate’s Jewish members who led the way.

So concludes a really interesting post by Shanna Pearson-Merkowitz and John McTague, in which they argue that Jewish U.S. Senators were instrumental in moving the chamber, and ultimately the American political system, toward acceptance of same-sex marriage. “The Jewish faith,” they argue, “has an unmistakably liberalizing effect on the Democratic Party, including LGBT rights.”

I was curious, though. Is this about Judaism, or is this generally about liberal ideology? To answer this, I used Dylan Matthews’ dataset charting when senators declared their support for same-sex marriage (as Pearson-Merkowitz and McTague did) and then added in Simon Jackman’s latest ideal point estimates for senators. I found that ideal points (a rough approximation of ideology based on roll call votes) did a better job predicting how long a senator has publicly supported same-sex marriage than their Judaism (or lack thereof) did. When you throw both variables into a regression equation predicting the log of the number of days that the senator has been pro-same-sex marriage, ideal point is statistically significant, and Jewish is not. I get the same results when I use Keith Poole’s DW-NOMINATE ideal points.*

Why is this? Well, note the graph below, showing Jackman’s ideal points for all the Democratic senators. More positive numbers indicate greater liberalism. Jews are highlighted in blue, non-Jews are in black: 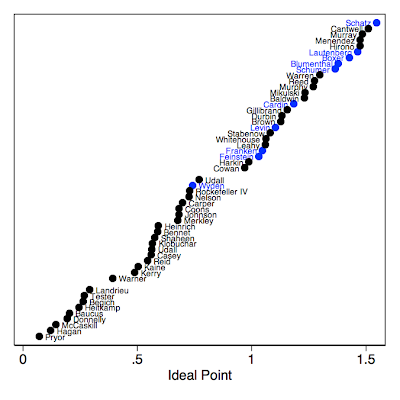 The clear lesson from this graph is that Jews are skewed toward the more liberal end of the scale. If Jewish senators are leading the way on same-sex marriage, it’s simply because they’re more liberal than many other senators. So why are Jews more liberal in the first place? Well, certainly part of it has to do with constituency: Senate Jews are disproportionately elected from more liberal states, such as California, Minnesota, New Jersey, and New York.

But it’s also fair to suggest that being Jewish is part of what makes these senators liberal. Jewish Americans, after all, vote roughly 70-30 in favor of Democratic presidential candidates and have done so for some time. There may well be, as Pearson-Merkowitz and McTague call it, a “cultural liberalism” in Judaism that steers adherents leftward.

On the other hand, it’s very difficult to sort out the different forces that lead one to become a liberal or a conservative. We tend to adopt our parents’ political views, but that transmission is obviously correlated with a great many things, religion being only one of them.

What the above analysis suggests to me is that there is nothing unique to Judaism that caused these senators to support same-sex marriage. They did this because that’s what liberals do. What made them liberals in the first place? A whole lot of things, including their religion.

*There’s some debate over whether to count Michael Bennet (D-CO) as Jewish. He has a Jewish mother (who escaped Poland during the Holocaust), although he apparently wasn’t raised in the faith and doesn’t practice it today. At any rate, the results hold whether he’s categorized as Jewish or not.