As DC-reporting supercouple Ezra Klein and Annie Lowrey informed the world last week, Larry Summers, the former Clinton treasury secretary, Obama economic advisor, Harvard president, and Aaron Sorkin character, has emerged as a top contender in the Fed-stakes for Ben Bernanke’s job. Summers-mentum has snuck up on and perhaps overtaken the wind at Federal Reserve Vice Chairman Janet Yellen’s back; Yellen was very recently seen as a shoo-in to become the first female Fed chairman, but according to Klein and his “plugged-in sources,” Summers was the front-runner as of the beginning of last week. The top reason offered by those sources to Klein: “President Obama really likes Summers. And he’s surrounded by Summers’s longtime colleagues and friends.” This is true, and it was repeated all over the place as reporters came to grips with this dramatic new twist. But what hasn’t really as widely discussed is the question of what the president finds so uniquely enamoring about Larry Summers of all people, to the point where he might pick him over an eminently qualified, highly predictable (from a policy standpoint), and—perhaps above all—historically significant candidate in Yellen. In other words, to paraphrase Michael Bluth: “Him?” 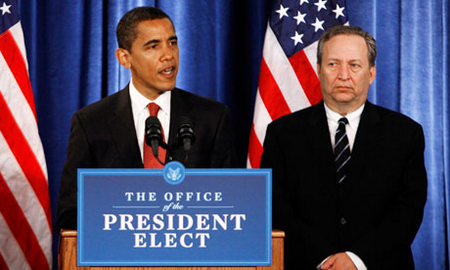 It bears mentioning that Summers is also a perfectly qualified and capable candidate in all the conventional ways. The reason he has raised liberal hackles is his record at the Clinton Treasury Department and later in the Obama administration, where he was a primary architect of some very pro-Wall Street policies, and also his private-sector dalliances with the same, where he has been rewarded handsomely for his loyalty. Paul Krugman probably represents the view of most mainstream liberal economists, in that he supports Yellen but cannot bring himself to be that concerned about Summers’s background, given that the two candidates would probably govern similarly on the key issue of preserving a loose monetary policy while unemployment remains high. But that hasn’t satisfied everyone on the left, for whom Summers’s coziness with Wall Street and deregulatory record has earned him pariah status in the wake of the 2008 crisis (just check out some of these headlines!). A third of Senate Democrats signed on to a letter urging Obama to pick Yellen after the Summers story broke. The notion that Summers would be a pragmatic pick from a political standpoint, since he would have more “credibility” with a hypothetical future Republican administration than Yellen, was pooh-poohed by AEI analyst James Pethokoukis. Meanwhile, even the constituency to whom a Summers pick would seem to be catered towards, Wall Street itself, issued a resounding thanks but no thanks, apparently preferring Yellen’s lengthier and more public record on monetary policy.

So there you have it: Liberals hate him. Wall Street doesn’t want him. Economists are meh at best. And he personally is a jerk. So what’s the deal, Mr. President?

Evidently, it really is just personal. Jerkiness notwithstanding, Obama and Summers became buddies during the crucible of the 2008 crash; as a principal Democratic Economics Guy, he was brought in to advise the then-senator on how to approach the situation both as a legislator and as a candidate in spite of the fact that Summers kinda sorta had a lot to do with wrecking the economy in the first place. Yellen, on the other hand, was unable to serve in a let’s-get-in-good-with-the-future-POTUS role by virtue of having a job to do as president of the San Francisco Fed. And so it was that Summers was brought on as chairman of the National Economic Council in the new administration, where the former’s proximity to Obama allowed his stock to rise further—not just with the president but with his economic team more broadly, members of whom have been the fiercest advocates for Summers’s selection. This may have something to do with the fact that so many of them also “owe their own jobs or career advancement to Summers” given his years in the Clinton Administration, Harvard, and Wall Street, three major feeder institutions for the Obama White House.

I’m not entirely satisfied with pure insider intrigue as the explanation for Summers-mentum. Another factor has to do with the nature of Beltway conventional wisdom: now that the Summers-is-the-frontrunner story is a story, it can’t be un-storied. If Obama were to pick Yellen now, he would, according to the Second Law of D.C. Narrative-Crafting, trigger an inevitable future Politico story about how he wanted to pick his loyal friend Summers but was badgered out of it by liberals/bankers/economists/women, and he capitulated to all of the above because he is a spineless wimp. Summers’s backers in the administration will no doubt harp on this point, and Obama may well see going along with them as his least-worst option, since that “capitulation” story will likely be a little less damning.

For him to take that path of least resistance, though, there has to have been something on the Summers-for-Fed-Chairman saddle for Obama to have grabbed onto in the first place, beyond the gamesmanship of who is owed what favor. And that something appears to be genuine friendship and loyalty, even if it was one born out of the aforementioned gamesmanship. Obama spent a good deal of time with Summers during his 2008 campaign and first term, and at some point their fondness for golf, their Harvard kinship, their eagerness (for slightly differing reasons) to put the lousy economic situation behind them, and their sheer proximity to one another became “Larry should be the Fed chairman.”

In the wake of the widespread backlash, I think it’s safe to say that Summers is no longer the front-runner as Klein described him a week ago, setting all this chatter off in the first place. But regardless of who gets picked, this events of the past week merit scrutiny because of the fact that the argument for picking Summers over Yellen or Roger Ferguson or whomever else amounts to a highly Washingtonian emphasis on “feels” over facts. No one outside of the White House wants Summers, for a whole variety of disparate but valid reasons. But the Summers support apparatus is self-sustaining because it is based solely on relationships located in close proximity to said White House and its chief occupant. “That’s perhaps the most important zone of influence of all,” writes Klein. “Obama knows Summers well, and really likes him.”

He really likes him.