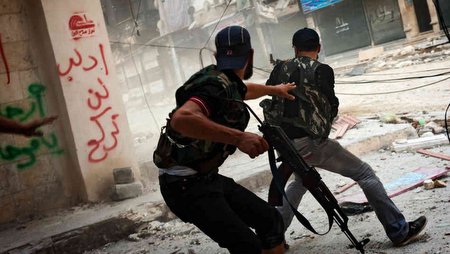 In an interview with NBC last night, President Obama urged the nation to watch YouTube videos from Syria showing disturbing images of dead men, women and children, as well as survivors writhing in agony on the ground. The White House says that’s the gruesome aftermath of a chemical weapons attack on August 21st , in which Syrian President Bashar Al-Assad killed well over 1,400 of his own people.

Earlier yesterday afternoon at an event at the New America Foundation, Ambassador Susan Rice echoed the sentiment. “We have the technology — on our computers and our smart phones — to see the full horrors unfold in real time,” she said. “Every adult American, every Member of Congress, should watch those videos for themselves. See that suffering. Look at the eyes of those men and women, those babies — and dare to turn away and forsake them.”

Rice said that while she “understands the public skepticism” regarding military action, particularly in the Middle East, she believes that diplomatic and political measures alone are insufficient. The U.S. does “not assess [that] limited military strikes will unleash a spiral of unintended escalating consequences,” she said.

Secretary of State John Kerry, who also spoke publicly on Monday, attempted to quell fears, too, arguing that any attack launched by the U.S. would be “unbelievably small.” Hours later, NBC’s Savannah Guthrie pressed Obama on Kerry’s military description. “What does that mean?” asked Guthrie. “I mean, are we talking a pinprick? A knockout blow? A punch in the gut?” Obama replied that “the U.S. does not do pinpricks” and that even a small military attack would be sufficient to seriously degrade Assad’s capabilities and deter future threats.

In an interview that aired Monday night with Charlie Rose, Assad warned that even a small military attack could unleash a disproportionate response. Should the U.S. strike Syria, it “should expect every action” in retaliation, he said, alluding to the attacks on September 11, 2001 and that Al-Qaeda and other terrorist groups could stand to benefit in unpredictable ways.

As the House and Senate gear up to vote on the Syrian issue beginning tomorrow, Obama’s odds of getting approval for his proposed military engagement are slim, particularly as alternatives to direct military action have begun to emerge—including the Senate’s proposal to give Syria 45 days to sign an international chemical weapons ban, and Russia’s proposal that would wrest control of chemical weapons from Syria.

Public opinion remains strongly opposed to military action. The latest CNN poll found that more than seven in 10 Americans say the proposed strike would not achieve significant goals for the United States. A similar amount believe it’s not in the national interest for the country to get involved in Syria’s civil war.

Obama and Rice’s pleas yesterday for “every adult American” to watch those videos is perhaps correct. We should watch those gruesome videos. We should be aware of the unfathomable horrors that Syrians are facing on the ground. We should witness, as best we can first-hand, the effects of Assad’s actions against his own people. But we should also watch many other kinds of videos too—testimony from journalists on the ground in Syria, policy-makers, academics and activists. In the era of 21st century warfare, where information abounds, we should be well-informed, but can’t afford to be undiscerning.