On Wednesday Ezra Klein posted a really smart take on the GOP’s budget strategy: they face a collective-action problem in that the position that is politically beneficial to most House Republicans as individuals (no budget without Obamacare repeal!) is a politically disastrous bargaining position for the party as a whole.

This is not an anomaly. As discussed on earlier, there have already been several exceptions to the “Hastert Rule” this year. Each violation presented a similar situation: most Republicans preferred a policy position that their leaders believed to be bad for the party brand.

I want to add a quick point to Ezra’s post: the fact that there is now a real distinction between what Republicans [say they] want and their collective political interests highlights the important difference between the polarization of the U.S. Congress and partisanship in Congress. By polarization, I mean the tendency of legislators within a party to hold policy views that are increasingly divergent from those of the opposing party, while partisanship means the tendency of the members of a party to cooperate with each other under the guidance (or even persuasion) of party leaders.

From roughly 1970 to 2010, we observed parallel trends toward increasing polarization and heightened levels of partisanship as shown below. Liberal Democrats (1970s) and conservative Republicans (1990s) believed that the own views and party interests would be advanced by stronger leaders.

The Tea Party
Republicans represent a break from this trend. It is not the case that the House has become “more partisan” over the last decade, but it has certainly become more polarized–particularly during the 112th Congress. While I hate to oversimplify the views of Tea Party Republicans as “more conservative” than previous Republicans (I would also say “differently conservative”), they epitomize this trend.

This makes it difficult to set the policy agenda in the House. Over the last thirty years, the classic strategy of House majority parties has been to emphasize issues that align their party base with mainstream public opinion, e.g. Republicans emphasizing tax cuts while Democrats prioritize education and minimum wage increases. However, the emphasis on purity over pragmatism among Tea Party activists makes it difficult to formulate any such proposals.  Let’s illustrate this with a Venn diagram: 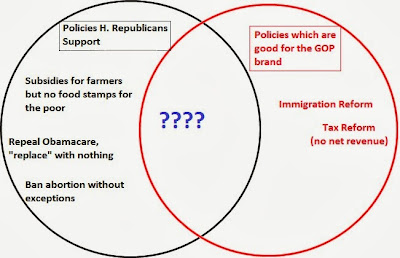 As individuals, the median House Republican is striving to maintain a record of pure libertarian conservatism, either out of sincere conviction or fear of a primary challenge from the right—or both. As a party, this makes it difficult to rally behind
positions that are arguably in their collective interest (support for immigration reform, a realistic “ask” in budget negotiations) and hard to budge from positions that are out of the mainstream. Right now, a once-obligatory farm bill is stalled indefinitely because the House Republicans are OK with subsiding farmers and farm corporations but can’t pass a bill that allocates a dime for hungry people.

They can vote to completely repeal HeritageFoundationCare RomneyCare Obamacare but can’t agree on any “replace” legislation that embodies their own comprehensive health care solutions.

Ezra Klein suggests that the solution is stronger parties—Boehner needs the power to make MCs follow the party line. That would be better than the status quo, but I am not sure that Tea Party Republicans would be responsive to the sorts of carrots and sticks that American party leaders have historically wielded. Defiance of party leadership seems to be part of the Tea Party creed, so the more one is punished the better a job he is doing. On the other hand, if party leaders had the power to personally select the party candidate for each seat, that would likely have a dramatic effect on House Republicans’ behavior. Otherwise, it is hard to see an alternative to waiting for the conservative base to abandon absolutism as a strategy.