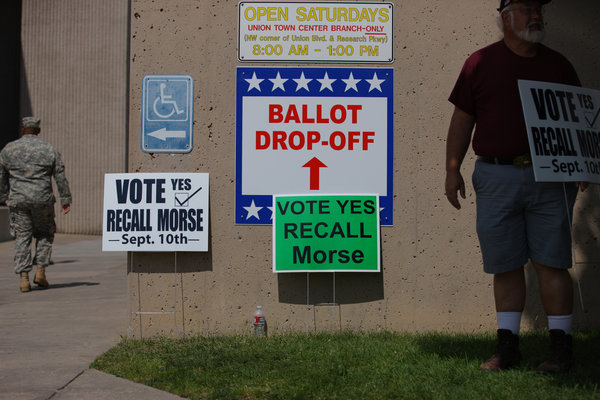 Much ink has been spilled in the past week concerning the long-term implications of the successful recall of two Democratic State Senators in Colorado, which centered on gun control measures passed by the State Legislature and signed by Governor John Hickenlooper. Indeed, with an election focused on a hot-button issue and little else nationally to distract big donors, money poured into the race from both campaigns and outside groups. A post-election analysis by the Atlas Project (here) determined that together the Democratic campaigns and outside groups had spent almost $2.3 million on both races, while their Republican counterparts merely spent a little over $500,000.

Some progressives would argue that this was an off year election and that special elections are notoriously bad for Democrats, when older and more conservative voters turn out. Additionally, mail ballots were not allowed, the election was at an odd time of year, etc. While all these facts are true, they should not have come as a surprise. So given the political leanings of these districts and the money advantage, how did Democrats lose two seats where nearly 60 percent of voters chose President Obama in 2012?

The short answer is: Democrats and their affiliated groups decided to spend the vast majority of their money on television and radio when the data show these methods are becoming more and more ineffective. As many as 4,055 commercials aired during the run-up to the recall election, 3,569 of which were from the Democratic side, over 88%. But to little avail.

It is no secret that it is becoming harder to reach voters through these traditional means. Long gone are the days of being able to put a 1,000 points on broadcast television with a guarantee of reaching your targeted audience. This is not just a phenomenon on the local level, in the 2012 Presidential election, more than $760 million was spent in total on advertising for Obama and Romney. In the end, this three-quarters of a billion dollars ended up having a net one percentage point change in the margin between the two candidates from the conventions to Election Day. That’s an astonishing $76 million for every tenth of a percentage point movement.

On the Presidential level, this behavior has turned into the campaign version of “Mutually Assured Destruction.” Given the results, it seems safe to say that the two presidential campaigns could have spent half the money they did on TV and ended up with the exact same result. As campaigns become flush with money, the arms race to meet the opponent’s levels of media spending quickly reaches the point of diminishing returns. After a few campaign commercials, results are no longer altered in a meaningful way.

This is not to say that the campaigns in Colorado should have given up TV advertising completely. However, in a low turnout election, in an off year, at an odd time, where mail ballots were not allowed, Democrats and their allies, decided to air 3,569 commercials instead of investing more resources in determining which voters they needed to turnout and which voters they needed to persuade to vote in these elections. If you have a 5:1 money advantage in a district that overwhelmingly votes for your party’s candidates, you should not be looking for excuses on why you lost. It is time for campaigns, Super PACs, 501c3s, and donors to start making more data based decisions on the growing realities of today’s world as opposed to what worked 20 years ago.

Stefan Hankin is the President of Lincoln Park Strategies, a public opinion research firm based in Washington, D.C.