So here’s some quick analysis of the vote (h/t Christian Grose) in the U.S. House of Representatives tonight to end the shutdown and raise the debt ceiling. I have only looked at Republican House members, since all Democrats voted aye.

I’ve tried to plot a number of relevant variables on the scatterplot below. Each marker is a Republican member of Congress. Tea Party Caucus members are marked with a “T”, others with an “o”. Those in red opposed tonight’s bill, while those in black supported it. The graph shows the interaction of ideology and experience. Tea Partiers tend to be more conservative and less experienced, and they were much more likely to have voted no tonight. More experienced and less conservative members were more likely to support the measure to end the shutdown. 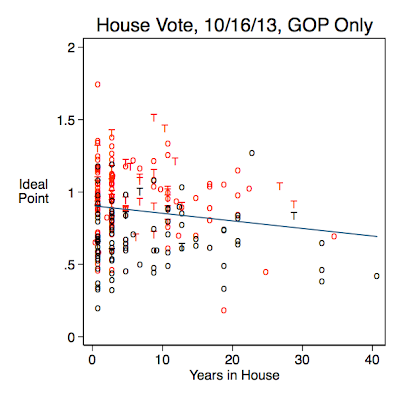 Oh, and for those of you who get off on this sort of thing, here’s a probit model predicting the likelihood of a Republican House member voting in support of tonight’s bill to end the shutdown. When you include length of service (“years”), ideology (“idealpoint”), Tea Party affiliation (“teaparty”), and the Democratic presidential vote share in their district (“obamavote2012”), only ideology and district vote maintain statistical significance, although Tea Party affiliation comes close.

[Cross-posted at The Mischiefs of Actions]