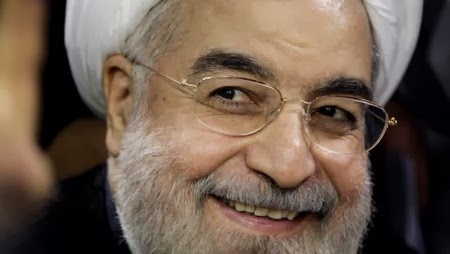 Diplomatic talks between world leaders and Iran earlier this month ended on the highest note in decades. While Iran stopped short of pledging to freeze its uranium enrichment program and offered no public plan to dismantle its nuclear facilities—both deal-breakers for hardliners—a diverse coalition of countries has already begun urging the U.S. to begin lifting sanctions on Tehran.

The next round of talks, scheduled for November 7, is expected to further advance those initial diplomatic baby-steps, raising the question of whether President Obama, should he promise to lift certain sanctions, will be able to do so, or whether he’ll have to get Congressional approval. Who controls U.S. sanctions anyway?

The short answer is that, as of now, the president has substantial power to enforce, strengthen, and waive sanctions with a stroke of a pen. But, of course, as in all things D.C., it’s more complicated than that. The long answer is that it’s possible that the politics and power struggles surrounding this particular issue could tie Obama’s hands as the process moves forward. Here’s a crash course in how it all works.

The U.S. has had various sanctions on Iran since 1979, but economic sanctions on firms and countries conducting business with Iran really kicked off in 1996, with a law known today as the Iran Sanctions Act (ISA). We’ve upped the ante over the last few years with the passage of several more laws—the Comprehensive Iran Sanctions, Accountability, and Divestment Act (CISADA), the Iran Threat Reduction Act (ITRA), the Iran Freedom and Counter-Proliferation Act (IFCA) and the National Defense Authorization Act (NDAA)—which together significantly expand the scope of ISA and give the president the authority to increase penalties on firms and countries making deals with Iran. The result? A beleaguered Iranian population and an economy with inflation rates of almost 40 percent and unemployment reaching almost 20 percent.

Built into all that legislation is also quite a bit of presidential flexibility. Using what’s known as “waivers,” as well as special rules and exemptions that are written into the laws, Obama can decide whether to lift or implement certain sanctions, when, and to what degree. These tools fall into two main buckets: fact-based exemptions and discretionary waivers.

Fact-based exemptions give the president some wiggle-room, should certain, Congressionally-defined situations arise. For example, if a country is caught importing Iranian oil, but can demonstrate that it’s taking steps to reduce its imports, the president has the power to exempt those countries from sanctions if he wants. (Obama has used this type of exemption to avoid sanctioning countries in the European Union, as well as countries like India and China.)

Discretionary waivers are more powerful and act as a kind of executive safety valve. They give the president unilateral authority to waive sanctions, typically for six months at a time, should he decide that doing so is “vital to the national security interests of the United States.” The language is intentionally vague.

There’s also other language in the sanctions legislation that gives the president power to act unilaterally. For example, in the NDAA, Congress included a series of “presidential determinations” giving the president the power to decide whether the oil markets can bear the implementation of the sanctions prescribed.

So that’s the short of it. “Can the administration act by itself to take advantage of its discretion? The answer is yes,” said Elizabeth Rosenberg, a Senior Fellow at the Center for a New American Security and former Senior Advisor at the U.S. Department of the Treasury, who played a major role in implementing and enforcing financial sanctions on Iran. But, Rosenberg warns, political missteps could complicate Obama’s ability to use that discretion. She says that unless Obama manages his relationship carefully with lawmakers in the next few months, as diplomatic talks with Tehran begin to progress, certain hawkish members of Congress could take steps to make his life difficult.

One big factor is that there is no rule requiring Congress to include presidential discretionary measures in sanctions legislation; it’s just been custom. So Congress could, for instance, pass more financial penalties on Iran and limit the scope of, or eliminate entirely, the waivers, exemptions and presidential determinations.

It’s a trick they’ve tried before. In July, just days before Iranian President Hassan Rouhani was sworn in, the House overwhelmingly passed the Nuclear Iran Prevention Act of 2013 (H.R.850), which called for increased sanctions on Iran and—perhaps more importantly—limited Obama’s ability to use the fact-based exemption. (While the language gets technical very quickly, a lobbyist who monitors Iran legislation and who would speak to me only off the record summarized it like this: If H.R. 850 were to become law, it “doesn’t get rid of the waiver, but it makes it essentially useless.”)

It’s unlikely that H.R. 850 will become law in its current form, but the specter of limiting the scope of the exemptions in current or future sanctions legislation remains important. According to Ken Katzman, an expert on Iran at the Congressional Research Service, Congress has made efforts to demonstrate that it is well aware it has this authority.

So what’s the point of all that thesaurus-wielding? Essentially it boils down to muscle-flexing. The lobbyist who works on Iran legislation put it like this: “The difference between ‘vital’ and ‘essential,’ or whatever it is, is legally meaningless. The change in wording is done by the proponents and the pressure groups of the bill just as a warning to the President—a show of political power—that they can tinker with this waiver too, if they want to.”

Tinkering with the language of the waivers and exemptions aside, Congress also has a few other disruptive tools up its sleeve. It could, for example, pass a joint resolution of disapproval of Obama’s use (or disuse) of the sanctions legislation. With a veto-proof majority in both chambers, joint resolutions carry the same legal weight as a law. Jamal Abdi, the Policy Director at the National Iranian American Council, also points out that it’s within Congress’ power to sue the U.S. government for not enforcing its laws. Both courses of action would require majority support in the House and Senate, That is, of course, unlikely at this point, given the fact that Obama’s cautious strategy enjoys the support of most Democrats and a war-weary public.

That support, however, does not preclude Congressional Republicans, and their allies on the right, from doing their best to throw a political tantrum should Obama agree to begin raising sanctions before Iran has suspended its nuclear program entirely. It’s possible, for example, that the House could continue to pass new sanctions legislation, as it did this past summer.

“You’re going to see more leaders like Mark Kirk (R-IL), publishing pieces wherever they can calling Obama an appeaser and bringing up the usual Nazi and Munich analogies,” said Matthew Duss, a National Security Policy Analyst for the Center for American Progress. In fact, Marco Rubio (R-FL) introduced a resolution for more sanctions just last week.

The American Israel Public Affairs Committee (AIPAC), the hardline lobbying group that enjoys an extraordinary amount of power in Congress, has argued repeatedly that the U.S. should not allow any loosening of sanctions until Iran has verifiably suspended its nuclear program. And Cliff May, the president of the Foundation for the Defense of Democracies (FDD) has called for an increase of sanctions on Tehran as soon as possible. He told the Washington Post that an increase “may push Iran dangerously close to the edge,” but that’s what’s necessary to make Iran realize that “smiles and empty rhetoric about ‘trust-building’” isn’t enough.

Anne Applebaum, a foreign policy columnist for the Post and Slate also expressed deep skepticism about lifting sanctions, citing the fact that hardcore Islamists still dominate much of the politics in Iran. “Talking is fine. But the negotiators in Geneva should leave any optimism at the door,” she wrote in Slate.

While Democrats in the Senate aren’t likely to allow new sanctions legislation to pass anytime soon, the discussion in the news—or a constant onslaught of new legislation passed by the House—might be enough to shake Iranian resolve. Abdi worries that if the US appears un-serious about dismantling sanctions, then Iran may be unwilling to make serious concessions in return.

Ultimately though while it’s not “beyond the scope and interest of this Congress” to make things difficult for Obama, it’s probably not “strategically wise” for them to choose that battle, either, Rosenberg says.

Obama’s strategy—cautiously considering winding-down sanctions against Iran in exchange for diplomatic cooperation—enjoys fairly robust popular support right now. In terms of those who back the renewed negotiations, “it’s a lot wider of a coalition than many people understand,” said Dylan Williams, the Director of Government Affairs for J Street. Anti-war coalitions, the U.S. business community, and the U.S. security establishment have all voiced support for negotiations. And according to the latest CNN/ORC poll, 78 percent of Americans are in favor of direct diplomatic negotiations between the U.S. and Iran—anything, it seems, to avoid another military engagement in the Middle East.

Duss, of the Center for American Progress, added that this could be an important victory for Obama. “I would just that note ever since Obama came into office, he’s been called naive, a dupe, an appeaser,” he said. “But here we are, five years later, and with regards to the position of Iran, there’s no way to say that this policy hasn’t succeeded in many ways.”