Cambridge physics professor David Mackay is scientific adviser to the UK Department of Energy and Climate Change. In his online best-nonseller Sustainable Energy – without the hot air, page 39, he thinks we are already at the practical limit of PV efficiency:

Typical solar panels have an efficiency of about 10%; expensive ones perform at 20%. (Fundamental physical laws limit the efficiency of photovoltaic systems to at best 60% with perfect concentrating mirrors or lenses, and 45% without concentration. A mass-produced [photovoltaic] device with efficiency greater than 30% would be quite remarkable.)

Accordingly his scenarios assume 20% panel efficiency for residential and 10% for utility. That’s till 2050. In 100% renewable scenarios, the volume of solar is constrained by total roof area and competing land uses. So if you could plug in a higher efficiency, the limits shift too.

There’s a huge amount of research going on into solar PV, in many different avenues. I looked for innovations which:

Why the last condition? The steep learning curve for solar PV – 22% cost reduction for each doubling in volume – makes the course of the industry strongly path-dependent. Polymer cells, say, would have to beat today’s silicon module costs (60-70c$/watt) before getting any market share at all. Nobody’s going to stake polymer PV the â‚¬120 bn FIT liability it took Germany to get silicon down to this price. It would need to emerge from the lab at 50c/w, which is extraordinarily unlikely. It’s this mechanism that has kept concentrating PV a market curiosity and a financial black hole.

Here are four horses that look good to me. 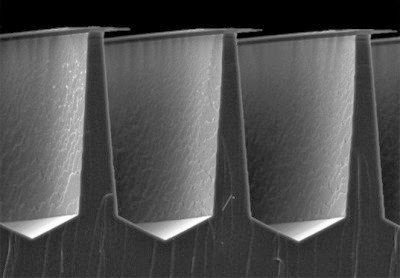 Californian company Solar 3D has a scheme to gouge precisely shaped channels or pits in the surface of silicon panels, to trap more light, and light from more oblique angles. They claim to achieve 25.47% internal efficiency, and a much bigger gain in daily power output because of the wide-angle performance. The grooves can be made by etching, a standard method in the semiconductor industry.

This photo is not from the company, which is keeping its precise design a secret. 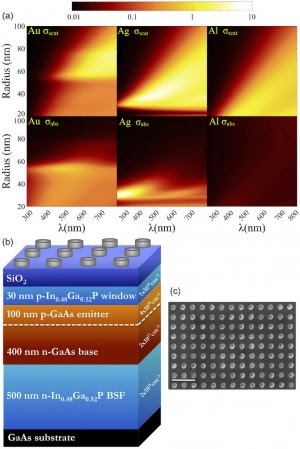 Nicholas Hylton of Imperial College London (et al) have a simpler idea to achieve the same result: deposit a Lego-style pattern of tiny 100nm aluminium dots on the top of the silicon or other PV wafer. He started with gold, but aluminium in fact works better. The dots bend light by quantum effects, trapping more of it in the semiconductor where it can give up its energy. Hylton claims a 22% gain in efficiency, say from 20% to 25%, but gives no information on the possible output gain from wider trapping angles.

1 and 2 seem to be alternatives. But I can’t see why they should not be combined with the others. 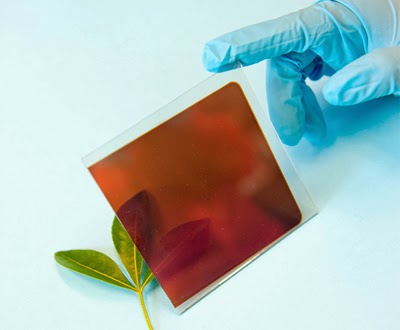 Perovskites are a class of crystals similar to the naturally occurring calcium-titanium minerals first found in the Urals in 1839. Michael GrÃ¤tzel at Lausanne has championed the use of synthetic perovskites for PV, and has reached 15% efficiency. His perovskites “have the formula (CH3NH3)PbX3 with X being iodine, bromine or chlorine”; they are deposited on a thin layer of titanium dioxide, the white in white paint. None of these elements are scarce (the lead is a worry). Another British team at Oxford – Henry Snaith and Michael Johnston, a fellow of my old college – have managed to get the same efficiency without any fancy nanostructures, merely with vapour deposition – another standard semiconductor technology. This brings perovskite cells into the realm of potential mass production.

15% is amazing for a new laboratory technology; it’s much higher than the 12% or so of production thin-film modules, which have benefited from years of improvement. By itself, it would still have a hard time catching up with silicon, and thin-film is overall slowly losing market share. However, perovskite films have a trump card: they are transparent. This means that in principle they could be combined with silicon.

Since they absorb light in a different part of the electromagnetic spectrum to silicon, the two materials might be used together in so-called tandem cells in which a silicon device would be placed underneath a perovskite one. “Here, the perovskite top cell would absorb higher-energy photons and the lower-band-gap silicon the lower-energy ones,” explains Johnston.

He did not guess an efficiency for the tandem cell, but his cannot be the only team trying to make them today to find out.

Two-junction cells of this type escape the Shockley-Queisser theoretical limit of 33.7% for an ideal single-junction p-n cell. They are not fantasy. Panasonic and others already make panels with a layer of amorphous silicon on top of monocrystalline silicon. SFIK these are not true two-junction cells, but they show that multilayer fabrication is commercially as well as technically possible. Johann Harter, the COO of the very big Austrian solar developer Activ Solar is “a strong believer in thin-film on silicon as a potentially strong solar option in the future”.

And just in time for multilayer cells come transparent graphene conducting sheets to take away the electrons knocked loose. Unlike perovskites, graphene is easy to grasp: simply a flat hexagonal mesh of carbon atoms, the 2D version of buckyballs and nanotubes.Marc Gluba and Norbert Nickel in Berlin

grew graphene on a thin copper sheet, next transferred it to a glass substrate, and finally coated it with a thin film of silicon. … Even though the morphology of the top layer changed completely as a result of being heated to a temperature of several hundred degrees C, the graphene is still detectable.

Graphene is a fantastically good conductor. Their next problem is soldering bigger conductors to something one atom thick … 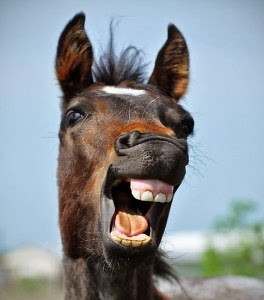 Can you combine these? My WimTechÂ® module would have the nanolego – it looks cheaper to fabricate than the grooves -, then the perovskite cell, then the graphene conductor to take away the juice, then a conventional 20% monocrystalline cell. Would it work? Could I get 35% efficiency? Would it be reliable? Can I keep fabrication costs in the same range per watt as plain silicon? (I can charge a small premium per watt, as with mono silicon today, because higher efficiency lowers BOS costs per watt.) Dunno, dunno, dunno, dunno. But there are many dumber ways of betting â‚¬10m on a really high-payoff idea.

Now you should not buy any horse from me, however shapely its teeth. There may be hidden problems with these ideas that will prevent their reaching mass deployment; and if not, they may be overtaken by swifter runners. I’m not asking you to believe that these specific innovations will bring more efficient panels.

The argument is that if I, an amateur searching using my patented method of filter-feeding on a few cleantech blogs, can easily identify four promising routes to overcoming Mackay’s limit, then there must be many more out there. The professional and economic incentives to find and deploy solutions are very, very strong: Nobel Prizes and fortunes. So they are much more likely to happen than not.

1. Technical progress in solar cells will be sufficient to maintain the learning curve in PV module cost, bringing it to ca. 25c$/w. (The production costs of the leading Chinese manufacturers are already down to 50c$/w today.)

2. The efficiency of good-quality mass-produced (not niche) panels will go up from 30%. This will help the (slower) reduction in BOS costs, most of which are proportional to panel area not power.

A couple of closing data points.

The net installed cost per watt of residential solar PV in Germany has fallen below $2/watt (â‚¬1.450/w). 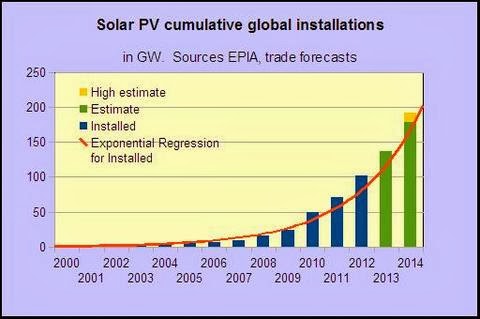