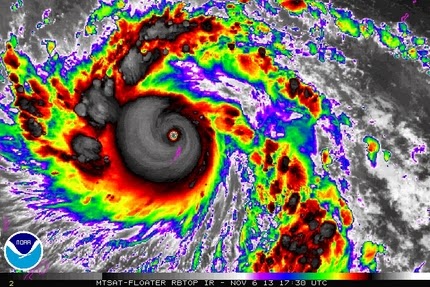 Andrew Freedman has a great writeup of the scientific discussion around climate change and the astonishingly powerful Typhoon Haiyan (coming on the heels of Cyclone Phailin, which hammered the Bay of Bengal last month) which is currently hammering the Philippines:

Its maximum sustained winds at landfall were pegged at 195 mph with gusts above 220 mph. Some meteorologists even proclaimed it to be the strongest tropical cyclone at landfall in recorded history. Haiyan’s strength and the duration of its Category 5 intensity — the storm remained at peak Category 5 intensity for an incredible 48 straight hours — raises the question of whether manmade global warming tipped the odds in favor of such an extreme storm.

The confounding issue is that hurricanes (same thing as typhoons) are complex, created by a slew of interrelated factors. Warmer oceans and more water vapor should make them stronger, but changes in prevailing winds or ocean currents or wind shear could screw up the formation process:

Between the U.N. Intergovernmental Panel on Climate Change’s (IPCC) report in 2007 and the latest report released earlier this year, the science has become less certain on global warming’s influence on such storms. That’s partly because the historical records of tropical cyclones, be they hurricanes in the Atlantic or Pacific Typhoons, are full of gaps in the data, varying methodologies and inaccuracies.

But what one can say with more confidence is that, when the semi-random factors for hurricane formation do line up, super storms will be more likely:

Monster storms like Haiyan may, in fact, become more common in the future, thanks to a readier supply of warm ocean waters and possible changes to atmospheric wind shear, which can tear storms apart, in some ocean basins that could aid such storms (such changes could also inhibit storms in other ocean basins). Some studies have found that manmade emissions of soot in South Asia, in addition to global warming, have already lessened wind shear over the Indian Ocean, leading to an increase in tropical cyclone intensities there in recent years.

Given that very strong storms cause a disproportionate share of total hurricane damage, this is a troubling prediction. It suggests that even if hurricane frequency goes down, total damage could still increase by a lot.