One of the most striking side effects of prolonged quasi-depression conditions is how desperate communities get for projects that will bring jobs. This isn’t a new development—as Ed has often noted, the Deep South’s economic development has been based largely on beggar-thy-neighbor tax breaks and weak labor laws—but five years of extremely high unemployment have exacerbated this trend.

Max Ehrenfreund had a good piece in the Washington Post detailing how this tendency intersects with climate change:

A proposed terminal on the Chesapeake Bay for exporting natural gas has divided environmentalists and members of the Calvert County Board of Commissioners, who approved a zoning exemption for the project last week and will consider another proposal Tuesday for granting the terminal’s owner tax credits that are potentially worth tens of millions of dollars.

If the project receives approvals from state and federal regulators, the owner, Dominion Resources, expects construction at the terminal in Lusby to cost $3.8 billion over three years, requiring thousands of workers.

Now, I’m not as anti-natural gas and anti-fracking as some climate hawks, because the current gas boom is badly hurting the coal industry, which is by far the greater villain in climate terms. But that distinction collapses considerably when liquefied natural gas exporting comes under consideration. First, one must cool it down to -161 degrees Celsius (a hugely energy-intensive process), then load it onto expensive, specially designed ships (see below). That increases total greenhouse gas emissions by about 15 percent. Worse, additional export would put upward pressure on the price of natural gas, which could reinvigorate the coal industry if it leads to high enough electricity prices. 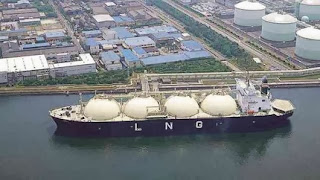 So, overall we’re talking large negative externalities for projects like these, which are under consideration across the country. This is probably why Calvert County officials wouldn’t say how huge the tax break they’re giving to the exporter is going to be:

For the next nine years, Dominion would receive a credit of 42 percent on the property taxes it owes the county. County officials declined to estimate how much in taxes Dominion would avoid paying because of the agreement, saying that such a prediction would be premature.

Behold the toxic intersection of economic depression and climate change. In a sane world, a project like this would face extra taxes on top of what non-polluting industries pay, to compensate for the damage they will do to the collective commons. But it’s hard to focus on the long term (or, more cynically, easier to sneak through unjustifiable favors) when one’s community is just struggling to get by.